This article is about the location in the film; you may also be looking for the song, "The Court of Miracles".

The Old Catacombs beneath Paris, France

Still standing
Court of Miracles is a place and one of the locations of Disney's 1996 animated feature, The Hunchback of Notre Dame. It is located under the city of Paris in the old catacombs (the secret entrance being found in a graveyard), where the gypsies hide out from the authorities.

“I believe that they have a safe haven within the walls of this very city. A nest, if you will. They call it the... "Court of Miracles"”
―Frollo tells Captain Phoebus about the Court of Miracles

In his obsessive desire to destroy the gypsies residing inside Paris, Judge Claude Frollo sought out to find and destroy the Court of Miracles, and for twenty years searched tirelessly for it without success. The gypsies have shared their knowledge of the place with very few outside their clans, and will execute intruders if it becomes necessary by hanging them before the entire court. One of the few outsiders entrusted with its secrecy is Quasimodo. While escaping Notre Dame, Esmeralda entrusted a woven necklace to Quasimodo, only explaining "When you wear this woven band, you hold the city in your hand". It was Esmeralda's hope that Quasimodo would come before them and escape the tyrannical judge's hold over him.

The following evening, while hiding a wounded Phoebus from the authorities on Esmeralda's request, Frollo confronted Quasi on his part in freeing Esmeralda. Vowing to "free" him from her enchantment, he claimed to know where the Court of Miracles was and intended to attack the next morning with a thousand soldiers. Fearing for Esmeralda's safety, Phoebus and Quasi set out to find the Court of Miracles before Frollo did (unaware that this is actually a trick to lead him there). Realizing his woven band was actually a secret map to the Court, Quasi and Phoebus found the symbol leading to the Court in a graveyard. While venturing through the catacombs they were ambushed by Clopin and the gypsies, set to be hung until Esmeralda intervened and told them that the two men were on their side. Phoebus urged everybody to escape, as Frollo would soon be upon them.

At that moment, Frollo and his men completely took over the Court of Miracles, having followed Quasi and Phoebus to its secret entrance. Frollo immediately took all the gypsies prisoner, intending to kill them all and to force them to watch Esmeralda's public execution in the square of Notre Dame. Phoebus, Djali, and Quasi were also taken captive, setting the stage for their final confrontation with Frollo at the cathedral.

The Court of Miracles was really a French term which referred to slum districts of Paris, where the unemployed migrants from rural areas resided.

The graveyard where the Court is located does exist in the 20th arrondissement (administrative district) of Paris, known as Cimetière du Père-Lachaise.  Coincidentally, the protagonist of Victor Hugo's Les Misérables, Jean Valjean, was given an honorary grave at Père-Lachaise.

The graveyard entrance to the Court of Miracles.

Inside view of the Court 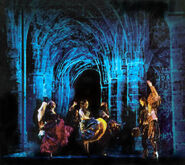 The Court of Miracles in the musical version