1998–present
Courtnee Alyssa Draper is an American actress, voice actress, singer, and lawyer. She is perhaps best known as Morgan Hudson in the TV series The Jersey.

For Disney, she played Sam in the 1999 Disney Channel Original Movie The Thirteenth Year and Megan Larson in the 2000's Stepsister from Planet Weird. She also voiced White Tiger in Disney INFINITY: 2.0 Edition and did additional voices in Kingdom Hearts. Additionally, she guest starred in sitcoms like Home Improvement as Erica. 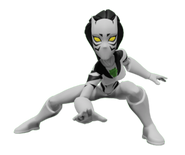 White Tiger
(Disney INFINITY: 2.0 Edition)
Add a photo to this gallery
Retrieved from "https://disney.fandom.com/wiki/Courtnee_Draper?oldid=4025553"
Community content is available under CC-BY-SA unless otherwise noted.