Disney Wiki
Register
Don't have an account?
Sign In
Advertisement
in: Characters, Child of Oberon, Gargoyles characters,
and 10 more

Active
Coyote is a Child of Oberon and the former antagonist of the Gargoyles episode "Cloud Fathers". Like his mythological counterpart, this depiction who encountered the Manhattan Clan is actually antagonistic and eventually roguish. The true form (which the animal Coyote is based on) is never shown and is eventually seen in the form of a young Peter Maza.

As the episode starts, a whirlwind with a coyote's head is shown on screen. It is revealed that the whirlwind is Coyote, since it could be possible he entered the Xanatos Corporation.

In 1996, the Manhattan Clan (with Peter and Beth Maza and without Goliath and Angela) went after the impostor who is impersonating a young Peter Maza. Bronx pounced on him and the impostor was thought to be framing Xanatos.

Coyote argued with Beth about the traditional Kachina dance and Peter Maza soon was angry with him. He was supposed to be captured by a tribe of Kachina natives, but turned into whirlwind before being alerted.

After Elisa, Beth, Peter, and Bronx saved Goliath and Angela from being killed, Beth's theory said that the impostor was actually Coyote. At a territory with the Kachina dancers, Coyote disguised himself as one of the natives to avoid being caught. Soon, he was captured by Coyote 4.0 to avoid being arrested.

While being brought back to the Xanatos Corporation, Xanatos explained to him about how the Coyote robot was never rebuilt with the Cauldron of Life. While conflicting Xanatos, he gets captured by Coyote 4.0.

Coyote later despairs about Peter Maza's taking of the Kachina costume and mask and soon later turns into a tornado to take care of Arizona.

"The Gathering: Part One"

Despite his return to take care of Arizona, Coyote returns with the other Children of Oberon. 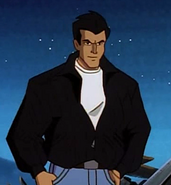