Milo and Liam
Craig Ferguson is a Scottish-American television host, stand-up comedian, writer, actor, director, author, producer, and voice actor who is best known for being the host of the CBS late-night talk show The Late Late Show with Craig Ferguson since 2005. He is also well-known for voicing Gobber the Belch in DreamWorks' How to Train Your Dragon franchise.

For Disney, he voiced Orion in the Hercules TV series, NOS-4-A2 in Buzz Lightyear of Star Command, Samuel T. Philander in The Legend of Tarzan, Owl in the 2011 film, Winnie the Pooh, and Lord Macintosh in the 2012 Disney/Pixar film, Brave. 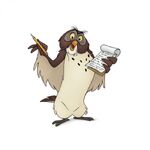 Lord Macintosh
(Brave)
Add a photo to this gallery

Craig Ferguson behind the scenes of Brave.
Add a photo to this gallery
Retrieved from "https://disney.fandom.com/wiki/Craig_Ferguson?oldid=4243036"
Community content is available under CC-BY-SA unless otherwise noted.