1
Craig McCracken is an American animator, director, and producer who is best known for creating the Cartoon Network animated shows: The Powerpuff Girls and Foster's Home for Imaginary Friends.

For Disney, he is the creator and executive producer of the Disney Channel animated series Wander Over Yonder. He is also married to Lauren Faust who also worked with Craig on all three of his shows. 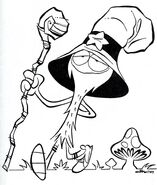 A drawing of Wander drawn by McCracken at the year of 2007
Add a photo to this gallery
Retrieved from "https://disney.fandom.com/wiki/Craig_McCracken?oldid=3915190"
Community content is available under CC-BY-SA unless otherwise noted.