November 6, 2017
"Crawler Commanders" is the sixty-seventh episode of the Disney XD animated series, Star Wars Rebels. It premiered on November 6, 2017, and is the eighth episode in the fourth season.

Still on the southern hemisphere of Lothal, the Rebels remain unable to make contact with Rebel Command, but pick up transmissions from a nearby ore crawler, which is stripping the surface of the planet for raw materials to feed the Imperial Factory. Upon investigating, they discover the crawler has a long range communications array that they can use to contact Rebel Command. They sneak alongside the crawler in a speeder, take out the droids on patrol, and seize control of the bridge, where they capture the Trandoshan captain known as Seevor. Seevor sets off an alarm, which alerts the Mining Guild HQ. They contact the crawler and expect a response. Ezra, imitating the voice of a Trandoshan, informs HQ that it was a false alarm, and the crawler was malfunctioning. He tries to convince HQ that they are foreseeing repairs, but HQ informs that they have dispatched Imperial forces for inspection. Locking the captain in a closet, Sabine gets to work on the transmitter, but discovers that someone has activated the intercom, sending out a signal coming from the rear section of the Crawler. Kanan and Zeb check out the rear section, and discover slaves at work. Among them was Cikatro Vizago, who had been hoping they would come to his rescue. However, they are caught off guard by another Trandoshan. Zeb engages the bulky Trandoshan in a fight, which leads them outside the crawler. Through a tough struggle, Zeb beats the Trandoshan, and throws him overboard.

Meanwhile on Yavin 4, Rebel Command is overseeing the data they have on the TIE Defender, but have yet to find a weakness. Hera suggests destroying the factory on Lothal before the Imperials begin mass production, by sending an attack force. However, everyone hesitates to commence an attack. They have recently discovered the Empire has new plans, involving a questionable evacuation of all Imperial personnel on Lothal, which raises concerns that something dreaded might be planned for the whole planet. Upon hearing this, Hera fears the worse and everyone is too afraid to do anything about it. So she steps forward and insists that they commence an attack, despite the odds. She manages to convince everyone that if they do not act immediately, their Rebellion will never stand a chance against a squadron of TIE Defenders. She says it is their time to strike.

Back on Lothal, Kanan and Zeb have freed the slaves on board the Crawler. Sabine reports two Imperial Patrol transports approaching. To convince the Imperials that nothing is wrong, Vizago impersonates as the captain, and Zeb as a guard. The transports land, and dispatch Stormtroopers to investigate. The troopers suspect nothing, and leave. However, Seevor has escaped and sabotaged power to the long range communications array. They suspect that he is in the refinery, and Ezra checks it out. He gets into the refinery by crawling through the ventilation. He finds the reactors shut down, and goes to turn them back on. Suddenly, Ezra gets jumped by Seevor. He fends him off with his Lightsaber, and after a struggling fight Seevor falls into the furnace after slipping on Ezra's lightsaber. The reactors are brought back online, and the Rebels finally make contact with Hera, who reports that the Rebellion has authorised the attack on the Imperial factory. 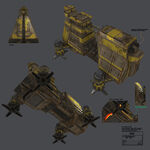 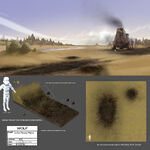 Retrieved from "https://disney.fandom.com/wiki/Crawler_Commanders?oldid=3369271"
Community content is available under CC-BY-SA unless otherwise noted.