2
Cree Summer Francks is an American actress, voice actress, and singer. She is best known for being the original voice of Penny in the 1983 cartoon series Inspector Gadget, as well as voicing Elmyra Duff in Tiny Toon Adventures, Animaniacs and its crossover, Pinky, Elmyra & the Brain, Susie Carmichael in Rugrats and its spin-off All Grown Up!, Valerie Gray in Danny Phantom, Maxine "Max" Gibson in Batman Beyond, Foxxy Love in Drawn Together, Numbuh 5 in Codename: Kids Next Door, Magma in the video game X-Men Legends, Yvonne and Gordon in Mrs. Munger's Class, Cleo in PBS Kids' Clifford the Big Red Dog, Dulcy the Dragon in Season 2 of the SatAM version of Sonic the Hedgehog, and Witch Haggar in Voltron: Legendary Defender.

She has also done work on several Disney productions, most notably voicing Kida in Atlantis: The Lost Empire.

Rayna Cartflight
(The Buzz on Maggie)

Beebe Bluff
(commercials and bumpers only) 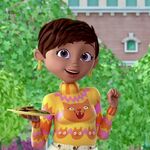 Cree Summer behind the scenes of Atlantis: The Lost Empire.

Cree Summer at the premiere of Atlantis: The Lost Empire in June 2001.
Community content is available under CC-BY-SA unless otherwise noted.