Tom Kenny
Creepy Cuddly Charlie is a monster who appears in the Doc McStuffins episode "Hide and Eek!". While playing hide-and-seek, the toys were scared of Charlie at first because they thought he was a real monster. But when Lambie got stuck in a tree, Charlie helped her, even though he couldn't speak clearly.

Charlie is a yellow-orange monster with three eyes, red horns on his head, a set of wings, an aquamarine tummy, a pair of green tentacles and dark green toenails. 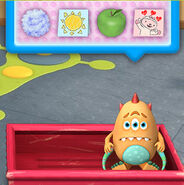