Taskmaster
Crimson Widow (real name Yelena Belova) is a Marvel Comics character who appears in Black Widow, played by Florence Pugh. She is an expert martial artist and markswoman.

The character's codename is actually Black Widow, but this wiki refers to her as Crimson Widow in order to avoid confusion with Natasha Romanoff.

Crimson Widow was created by Devin Grayson and J.G. Jones.

Yelena is set to appear in this movie.

When Baron Strucker reactivated the Red Room, he trained Yelena to be the next Black Widow. Baron Strucker later sent Yelena and some HYDRA Agents to abduct Bruce Banner and bring him to his base in Siberia. When Black Widow arrived, she fought against Yelena upon learning about her history and how Baron Strucker is using the Winter Soldier program to turn Bruce Banner into Winter Hulk. Upon Captain America and Iron Man arriving, they helped Black Widow to fight Yelena Belova, Baron Strucker, and Winter Hulk. Yelena later goes against Baron Strucker's orders and knocks him out. While Captain America and Iron Man fought to keep Winter Hulk from reaching a civilian location where a HYDRA base is, Black Widow continued her fight with Yelena even when she activated the mind-controlled washouts of the Red Room. Upon disabling the mind-controlled Red Room washouts, Black Widow defeated Yelena who managed to get away. 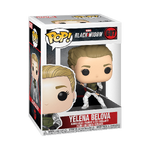 Retrieved from "https://disney.fandom.com/wiki/Crimson_Widow?oldid=4302084"
Community content is available under CC-BY-SA unless otherwise noted.