2006-present
Cristela Alonzo is an American stand-up comedian, actress, screenwriter, and producer, who is known for creating and starring in the ABC show Cristela.

For Disney, she voiced Cruz Ramirez in Pixar's Cars 3, in which she reprised the role again in the video game Cars 3: Driven to Win and the short film Miss Fritter's Racing Skoool. She plays Lupe Garcia in Growing Fangs which is part of the Launchpad series. 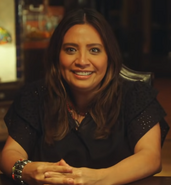 Lupe Garcia
(Growing Fangs)
Add a photo to this gallery 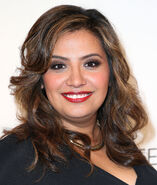 Cristela Alonzo behind the scenes of Cars 3.

Cristela Alonzo at premiere of Cars 3 in June 2017.

Cristela Alonzo visiting The Late Show with Stephen Colbert in January 2018.
Add a photo to this gallery
Retrieved from "https://disney.fandom.com/wiki/Cristela_Alonzo?oldid=4552632"
Community content is available under CC-BY-SA unless otherwise noted.