With Disneyland's incarnation of the Country Bear Jamboree show declining in popularity, management was looking to replace it with a new attraction. One group from Imagineering, hoping to preserve the Country Bear characters and allow them to still have a place in the park, proposed a soapbox derby racing themed attraction with guests riding in ramshackle cars and running up against the Country Bears in a variety of wacky vehicles, with Henry serving as the race's announcer. However, the concept would be rejected in favor of simply building a copy of The Many Adventures of Winnie the Pooh.

Henry and Sammy as race announcers 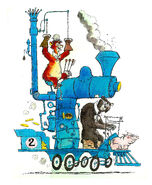 Ted blowing a wind powered car
Add a photo to this gallery
Retrieved from "https://disney.fandom.com/wiki/Critter_Country_500?oldid=3423542"
Community content is available under CC-BY-SA unless otherwise noted.