When Minnie's Cafe runs out of croissants, Mickey must deliver them to her fast, fighting wild traffic and other obstacles across Paris!

In Cafe Minnie, Paris, France, Minnie tells the guests to buy cafes (coffees) and croissants (crescents) and writes down their orders as she goes to the kitchen. She vocalizes a jaunty French tune that is cut short when she discovers she's all out of croissants. She calls Daisy for help and Mickey jumps onto his scooter. He wears a cyan helmet and drives into stores and lampposts, then stops when he sees heavy traffic. Mickey sees a church, drives on the vehicles, jumps over the wall, and hits the saints, who sing a hymnal version of "Mickey Mouse March" while floating before landing. Mickey lands on the roof, jumps to the left side, and out of the church as the living statues cheer. He crashes into a barn and rides a goat after the doors open. He gets chased by the goat, jumps over a crate, dodges the big silver cans, and gets back on his scooter again.

Outside Cafe Minnie, a customer keeps complaining to Minnie that he needs a croissant, and Minnie hopes that Mickey will arrive soon.

Mickey sees pigs driving big brown trucks, jumps over them, and lands on a small yellow truck. Then he holds a hat to summon the police car as he gets in. Mickey pulls out a bag to summon pies and cars slip on banana peels and crash as the police eat pies. Mickey scares a big lion statue, jumps onto a horse statue as a ramp, and holds a big red windmill on "Moulin Rouge", as his scooter flies through Cinderella Castle. Prince Charming tries to fit Cinderella's glass slipper, but it breaks. Mickey apologizes to Prince Charming and the scooter breaks a table, a vase, and the suits of armor. The kids catch falling croissants while riding the merry-go-round. The crowd shouts to Minnie, and a kid tells Mickey to give the croissants to the guests. Mickey get an idea: he uses a baguette as a staff, gets the croissants, and goes to Cafe Minnie. He throws the croissants to the guests, who declare Mickey a knight. Minnie removes his knight helmet, tells him she is her knight, and kisses him, and his scooter beeps triumphantly as he winks his right eye.

French phrases and their translations

Place of the World

Just as Prince Charming was about to put the glass slipper on Cinderella’s feet, Mickey breaks through the glass. 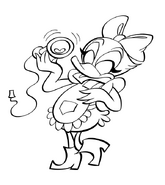 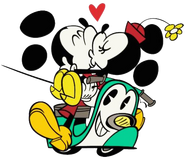