The New Adventures of Winnie the Pooh
My Friends Tigger & Pooh

Crows are minor antagonists from the Winnie the Pooh series.

The crows are Rabbit's enemies, alongside the bugs. They regularly steal and/or eat the food in his garden. Rabbit has tried many methods to get rid of these pests with little or no success, as they usually outsmart him. However, Rabbit has occasionally managed to drive the crows away by using tactical force, such as building a makeshift machine to torture the crows and make them flee. In some instances, Pooh (or someone else) would somehow frighten the crows away instead of Rabbit. In "Tigger Got Your Tongue", they anonymously stole vegetables from under Rabbit's garden and were given the name "the Nobodies". They are last seen in "Owl's Well That Ends Well", when Owl's singing frightens them away from Rabbit's garden, causing them to flee and never come back.

One of the crows from "A Very, Very Large Animal"

The Crows' defeat in "Owl's Well That Ends Well" 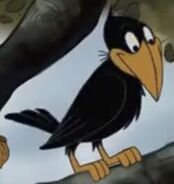