His shell getting dirty

Crush is a sea turtle and a supporting character in Disney/Pixar's 2003 animated film, Finding Nemo and its 2016 sequel.

When it comes to traveling the ocean's currents, no one has as much fun as Crush. The 150-year-old sea turtle is young at heart with a laid-back surfer dude attitude that lets him go with the flow. But Crush is no drifter; he loves nothing more than the thrill of riding the rollicking East Australian Current (EAC) with his offspring. When Crush encounters Marlin and Dory, he's more than happy to help them find their way, provided they can hold on for the wildest ride of their lives.[1]

Crush is a sea turtle who speaks in the manner of a surfer dude. He helps Marlin and Dory get to Sydney Harbour to rescue Nemo. His nicknames for Marlin and Dory are "Jellyman" and "Little Blue", respectively. After he transports Marlin and Dory to their destination to find Nemo, Marlin asks Crush how old he is to which he replies, "150, dude, and still young!" Probably. the best way to describe Crush is a surfer punk who loves and cares for his son, Squirt.

Having escaped from the jellyfish forest, Marlin and Dory end up in the East Australian Current where Crush tells Marlin to focus when on the current where he explains that escaping from the jellyfish was not easy. Crush introduces himself to Marlin to which Marlin tells him that he needs to get to the EAC to which he explains to him that he is on the EAC, telling him to look at the other sea turtles swimming in the current. Crush then tells Marlin to hang on as he and the other turtles are approaching a strong current. After hanging on, Marlin tells Crush to help him and Dory help find Nemo at Sydney Harbour. Crush later watches Dory playing with the baby sea turtles in the current much to Marlin's enjoyment. Thinking Squirt is about to be lost in the sea, Crush tells Marlin to observe Squirt's solo in getting into the current by himself. When Squirt swims into the current by himself, Crush is proud of his son for conquering his fear of getting in the current without an adult sea turtle's help, then Crush introduces his son to Marlin. Crush explains that sea turtles leave eggs on the beach for them to hatch and when they hatch, they find their way back to the ocean independently. While still on Crush, Marlin explains to the small sea turtles about his tragic story about Nemo to which the sea creatures tell the story about Marlin's search for Nemo.

The next day, Crush transports Marlin and Dory to their destination to help find Nemo, telling them to get ready to hang on during another strong current to which he tells them about Squirt doing a proper way to exit the current; Squirt explains to the two fish to be careful when on the current and hang carefully. Just as Marlin and Dory leave the current, Crush tells the two to have a great time looking for Sydney Harbour. Crush and the small turtles then bid a farewell to Marlin to which he explains that Nemo would have loved this experience if he were here. Telling Crush of how old he is, Crush replies that he is 150 years old just before leaving while Marlin keeps the age of how old Crush is to tell Nemo about his experience in meeting a sea turtle.

Crush returns in the sequel Finding Dory, this time as a minor character. In this sequel, he only makes a brief appearance where he and Squirt help Marlin, Dory, and Nemo get to Morro Bay, California in order to find Dory's parents Charlie and Jenny. While Marlin, Dory, and Nemo hang onto Crush, they arrive at their destination in a sunken wreckage where he and Squirt wish the three good luck into helping Dory find her missing parents. Crush and Squirt are never seen again throughout the rest of the film after they transport Marlin, Nemo, and Dory to their destination.

Crush is an easy-to-find character in the Disney Parks. He appears in his own talk show (Turtle Talk with Crush) at The Seas with Nemo & Friends of each resort (except Disneyland Paris). He also appears in Finding Nemo - The Musical at Disney's Animal Kingdom, Crush's Coaster, Finding Nemo Submarine Voyage and The Seas with Nemo & Friends, as well as World of Color and Tokyo DisneySea's Fantasmic!.

He is also seen as a giant statue at Walt Disney World's Disney's Art of Animation Resort. 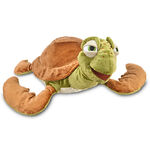 Crush and Squirt in It's a Small World: The Animated Series. 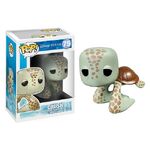 Crush mosaic in the end credits of WALL-E

The Crush sticker on Andy's door

Crush appears with another turtle in Lava

His and Squirt's Disneystrology page 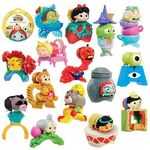 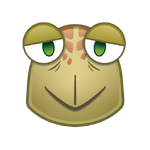