Crush's Coaster is a spinning roller coaster based on Finding Nemo in Toon Studio at Walt Disney Studios Park at the Disneyland Paris Resort. It opened on June 9, 2007 as part of the Toon Studio placemaking project. It has become one of the park's most popular attractions.

In August 27, 2021, following Disneyland Paris' reopening, Walt Disney Studios Park announced that the attraction was set to become part of Worlds of Pixar.

Entering a blue soundstage and setpiece from the film, guests find themselves at Sydney Harbour at sunset. Boarding a turtle shell, the attraction begins with guests diving under the sea, going outside and into a cave, leading into a dark ride portion.

Journeying with Nemo and Squirt through the Great Barrier Reef, past glowing fish and jellyfish forests and Bruce's sunken submarine home. Afterwards, the attraction shifts into a spinning, high-speed roller coaster experience representing the East Australian Current, eventually making its way back to Sydney and the station. 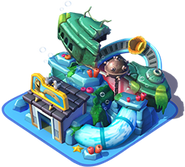