Disney Wiki
Register
Don't have an account?
Sign In
Advertisement
in: Characters, Villains, The Brave Little Toaster characters,
and 9 more

The Crusher is the tertiary antagonist of The Brave Little Toaster.

He is a car crusher used in the same junkyard as his partner, the Giant Magnet. As his name suggests, he is a large crushing machine designed for crushing cars. Since the Crusher needs the Giant Magnet to be able to accomplish this, it is likely that he and the Giant Magnet are both parts of the same body. Like the Giant Magnet, the Crusher shows no sympathy towards its victims and does not regret killing them. He also never speaks, but like Street Lamp and Traffic Signal, whereas most appliances and the Junkyard Cars can move, he cannot. His only moving components are; the conveyor belt that brings victim cars to him and an upper-mandible piston which crushes them into cubes. It is unknown if the Crusher really is alive or not; however, he does have two eye-like shapes above his mouth. Interestingly, before crushing the first two cars, he stops moving until the car gets into his mouth, which implies that he truly is alive.

The Crusher seen through the Corvette's windshield 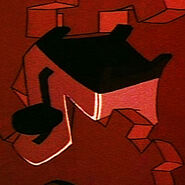 The Crusher's gears are jammed by Toaster