Hulk and the Agents of S.M.A.S.H.
Ultimate Spider-Man
Guardians of the Galaxy
Avengers Assemble
The Inhumans

Humans, peace between her people and the outside world, her boyfriend Human Torch

Crystal Amaquelin is a member of the Inhumans, and the younger sister of Medusa Amaquelin. She has the power to manipulate the four classical elements of Air, Fire, Water, and Earth.

Crystal was created by Stan Lee and Jack Kirby.

Crystal is a very kind and energetic person, who is naïve to what the world is like.

Crystal possesses genetically superior Inhuman physiology, which has been enhanced and mutated by exposure to the Terrigen Mist. She has the ability to mentally manipulate the four classical Greek elements: fire, water, earth, and air. She does so by means of a psionic interaction with the substances on a molecular level. By controlling oxygen molecules she can cause fire to spontaneously ignite or she can douse any oxygen-based flame by depriving it of oxygen. She can join hydrogen and oxygen molecules to create rain, summoning these molecules from a volume of atmosphere within a radius of approximately two miles. She can control the movement of water by manipulating surface tension, divining water from the ground and causing it to flow in designated directions. The observed maximum volume of water she can control is approximately 2,000 cubic feet (about 15,000 gallons). Thus, she cannot change the course of rivers or cause the sea to part. She can control the various substances that make up common bedrock (earth: iron, granite, shale, limestone, etc.), creating seismic tremors of up to 6.7 on the Richter scale (greater if tectonic plate fault lines are nearby) by causing a sudden shifting of the earth. The observed maximum volume she can affect at once is 1.8 x 10" cubic feet (approximately 1/800 of a cubic mile). She can also control oxygen atoms and oxygen-containing molecules to create atmospheric disturbances of various kinds. By intermingling air with earth she can cause a dust storm, air with water a typhoon and air with fire a firestorm. She is able to create a wind of tornado intensity.

Crystal only appeared in a picture of the Royal Family. She is with the Inhuman Royal Family where they confronted Spider-Man and Triton outside the abandoned Inhuman city of Atorag.

She is among the Inhumans that were affected by a plague that caused crystals to grow on their bodies. Crystal appears at the end of the episode where Medusa thanks the Guardians of the Galaxy on Black Bolt's behalf. In the episode "Inhuman Touch," Star-Lord officially meets Crystal and tries to romance her to no avail. She later helps the Guardians of the Galaxy when Maximus tricks his way out of prison. 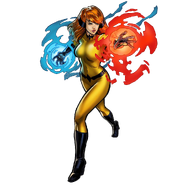