Cull Obsidian is a Marvel Comics character that appears as one of the secondary antagonists of Avengers: Infinity War and a supporting antagonist in Avengers: Endgame. He is a member of the Black Order, which is the special strike team of Thanos.

Cull Obsidian is one of Thanos' more aggressive and ruthless enforcers.

Cull Obsidian participated in attacking the surviving Asgardians while retrieving the Space Stone. Obsidian and the Black Order are teelported away by Thanos. Both Ebony Maw and Obsidian are sent to New York to secure the Time Stone while being confronted by Doctor Strange, Wong, Iron Man, the Hulk and Spider-Man. As he attacks Stark, Wong uses his magic to send Obidian to Antarctica. Realising he has been tricked, Obsidian tries to return through the Inter-Dimensional Portal before Wong closed it, severing Obsidian's forearm.

He fought in the Battle of Wakanda, attacking Vision until the Hulk intervenes. Obsidian attempts to kill Bruce, but he manages to escape his attacker by letting his left arm trap Obsidian into the gauntlet while Banner turns on the arm's inbuilt thruster. He was sent flying away as the arm began to burn before exploding, automatically killing Obsidian.

Obsidian appears in the battle of Earth after the Hulk brought those who died in the previous film back to life. He faces off Captain America, who hits him with Mjolnir. He began battling Korg before Drax the Destroyer began rapidly stabbing Obsidian with his own daggers. However, he escaped the duo and attacked Iron Man in an attempt to kill him until Spider-Man used his spider-webs to pull him backwards, falling onto the ground. Before he got up, an enlarged Ant-Man stomped on him, killing Obsidian. 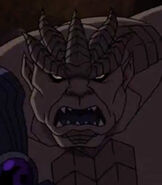 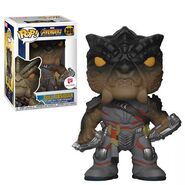