Cupid[1][2] is the bringer of Love in the animated television show American Dragon: Jake Long, in the episode "The Love Cruise". He was voiced by Nestor Carbonell[3][4].

Cupid puts his arrows into Gramps' care while he goes on vacation. Jake brought them with him on his school's Love Cruise. Spud used them on Stacey and Trixie used them on Kyle. But the two began to grow tired of constantly being fawned over. After Rose told Jake that they needed to spend time apart, Jake became even more heartbroken when he saw Brad making a move on Rose, not knowing that she rejected him. Jake used an arrow on Rose, hoping to save their relationship, but the arrow instead made Rose hate Jake. Fu Dog then explained to Jake that if someone struck with Cupid's arrow is already in love with the first person they see, their love turns into hate, meaning that Rose actually did love Jake. The arrows then start getting flung of control. They make the ship's captain fall in love with the Statue of Liberty, Principal Rotwood fall in love with a radio, Fu Dog to fall in love with his reflection, a girl to fall in love with a sandwich, and a cheerleader to fall in love with someone else besides her date. In the end, after everything is restored, Cupid comes back to get his arrows back and sees Jake depressed that Rose had broken up with him. 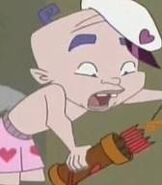 Retrieved from "https://disney.fandom.com/wiki/Cupid_(American_Dragon:_Jake_Long)?oldid=3357190"
Community content is available under CC-BY-SA unless otherwise noted.