The Adventures of Ichabod and Mr. Toad
Who Framed Roger Rabbit (cameo)

Flies on an airplane with Toad.

"Ha-Ha! I thought you wouldn't know that, guv'nor!"
Cyril Proudbottom is a character and J. Thaddeus Toad's horse in Disney's 1949 short The Wind in the Willows, a segment of the 1949 feature film The Adventures of Ichabod and Mr. Toad.

Cyril first appears in the beginning of the film pulling a gypsy cart and giving Toad a ride while singing, "We're Merrily On Our Way". As they continue riding Cyril and Toad are stopped by Rat and Mole who Toad introduces Cyril too. Rat tells Toad that he must give up Cyril and the cart, but Toad refuses. After Toad escapes from his house to find a motorcar, Cyril joins him and they follow a red motorcar to a bar where Toad trades his estate Toad Hall for the motorcar. Toad is subsequently arrested as the car is stolen. Cyril defends his friend in court by saying his honestly traded the house for the car. However, the witness to the deed Mr. Winkie, instead says Toad stole the car and then tried to sell it to him. Cyril angrily lashes out at the lie, but Toad is sent to prison anyhow.

Later on Christmas Day, Cyril, disguised as Toad's grandmother, is allowed to see him. He gives Toad a disguise and they escape.

After Toad's name is cleared, Cyril joins his friend on a plane ride.

Cyril made a cameo appearance during the final scene with the Toons (though his fur color was brown). 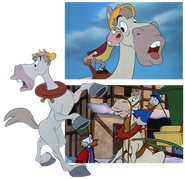 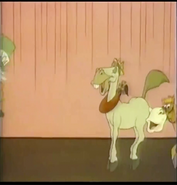 Retrieved from "https://disney.fandom.com/wiki/Cyril_Proudbottom?oldid=2874989"
Community content is available under CC-BY-SA unless otherwise noted.