“Tell me I deserve to be your successor. Call me... Tron!”
―Cyrus to Tron (his former mentor)

Cyrus is a recurring character and antagonist in the 2012 Disney XD television series, Tron: Uprising. He was a guard at Clu's repurposing facility, from which he aided Tron's escape, and later became the first Renegade.

Cyrus was one of the programs guarding the room where Dyson tortured his victims. He wondered why Tron didn't scream under the blade, as all the others had; his colleague's answer was simply, "He's Tron." Ordered to move Tron from the torture chamber to Clu's throne ship, Cyrus was horrified by the gaping injuries Dyson had left.

Tron, seriously injured and barely capable of speech, was shackled in the recognizer that was to transport him, but Cyrus released him and bailed out with him while the recognizer was left to crash. He dragged Tron to safety, encouraging him to take heart and telling him he'd be all right. Tron asked why he was doing this, and Cyrus answered with words that Beck would later echo: "We can't let the revolution end before it has a chance to start."

For an unspecified time, Tron trained Cyrus to fight, and subsequently, Cyrus became the first Renegade. Over time, though, Cyrus went insane, believing the only way to save the Grid and end all suffering within it was to destroy it. When Tron found out about Cyrus's plan, he managed to subdue his mentee and imprison him in a secret compressed-space construct built by Able and located beneath an energy pool in the Outlands. Tron's later conclusion was that Cyrus had always been a mistake and that he had never been worthy of the name or uniform he'd worn as the first Renegade.

Long cycles later, Beck found Cyrus still trapped where Tron had left him. The former guard, nearly unrecognizable with thin white circuits all over his face and body, claimed that fate had brought them together, and led him deeper into the construct.

Cyrus then revealed to Beck that he had reconfigured the construct into an energy collector with which he was preparing to generate an electromagnetic pulse that would wipe out a large portion of the Grid, thereby "freeing" the programs oppressed by Clu. When Beck objected, Cyrus revealed to him why he had been imprisoned and his background as the first Renegade, which stunned Beck, as Tron had never spoken of having trained another warrior.

Cyrus used Beck, along with himself, as battery power to break out of the compressed space, but fell back into it when Beck broke free. Beck, seeing the door to the prison shattered after the device exploded, left the area believing that Cyrus had died—and so was not there to see Cyrus climbing out of the remains of the door with a maniacal laugh.

Sometime later, Cyrus arrived in Argon City, initiating a campaign of revenge against Tron and Beck by framing the Renegade through acts of terrorism, wearing the Renegade's white suit and leaving some of his victims alive with an exhortation to tell others what they had seen. Catching Beck's attention, Cyrus attempted to unsettle him and exploit his behavior: stealing the white disc that Tron had given him and replacing it with a virally infected copy; spreading rumors that Beck had quit his job at the garage; and befriending Zed and Mara by claiming to be an old friend of Beck's, hanging out with them at the 0001001 Club and taunting Beck with oblique allusions to his secret identity, his refusal to kill programs, and his reluctance to confide in his friends. With no idea what Cyrus represented, both Zed and Mara took to him immediately, though Zed, who particularly liked his style, offended him by calling him "Cy." When they left to dance, Cyrus told Beck that he'd hidden a bomb in the garage—but he had actually hidden it on Beck's light cycle, counting on Beck's "predictable" rush to save his co-workers as a method of bringing the bomb straight to them.

Soon after, with the help of the viral disc which Beck had, again predictably, brought straight to Tron, Cyrus infiltrated Tron's lair, confronting his former mentor with a mocking, "What, no hug?" Cyrus was able to take Tron prisoner, later capturing Zed and Mara as well, and left a message on the disc to await Beck's arrival at the empty lair. The message further derided Beck's predictability and detailed Cyrus's plan: he'd strapped time-bombs to the three captured programs, hid Tron in one place, and Mara and Zed in another, and left one code-key at the hideout. Programs, he added viciously, were programmed, having no freedom of choice; but he was giving Beck a choice now: with no time to reach both sites, he meant to force Beck to choose whether to be a mechanic or the Renegade.

When Beck showed up at Tron's location, freeing him from the bomb, Cyrus showed up to gloat over the impossible choice he'd given the new Renegade, attacking them both and appearing to be winning—only to realize that Beck had used Bodhi's recoding tool to free him, sending Able to free Mara and Zed. Raging at the failure of his plan, Cyrus attacked again; Tron held him off while Beck went to help Able. As the fight continued, Tron and Cyrus appeared evenly matched in terms of skill, but Cyrus had the edge in strength and stamina, pinning Tron repeatedly and demanding to be acknowledged as his successor. Tron, however, managed to attach the discarded bomb to Cyrus's chest and removed the recoding tool, restarting the countdown in both his own bomb and, unbeknownst to him, the ones Able had just detached from Mara and Zed. The bombs immediately started to sizzle with red energy, and Cyrus, screaming in pain, fell off the edge of the platform they were on; but when Tron looked over the edge, the bomb was lying on the ground and Cyrus was nowhere to be seen.

While Cyrus had vanished, his plan had been largely successful, leaving Beck's reputation as the Renegade ruined for some time when Mara blamed him for Able's death.

Cyrus was never seen again after the loss of Able, his current whereabouts are unknown.

Cyrus showed compassion as a guard, going so far as to rebel after seeing Dyson's cruel treatment of Tron, but over the cycles, his kindness was twisted into insanity, and he now believes that destroying the Grid and all life on it is the only way to end his fellow programs' suffering.

He was pleased to meet Beck and eager to convince him that destroying the Grid was inevitable and right, but when Beck opposed him, he was just as willing to overpower him and use him to power the escape device against his will. He did not seem to fear the terrible pain involved in escaping from the compressed space, and showed no real concern about putting Beck through the ordeal, though he fell back into his old habits of reassurance as Beck struggled to escape: "And now I need you to be brave, because this may hurt a little."

He showed a strong belief in fate, repeating several times that he and Beck were "meant" to meet one another. He was also the first program to directly address the concept of free will, a trait which Kevin Flynn did not believe programs possessed, asking Beck if he believed in it and cutting off any answer with "Yeah, neither do I." Later, in his recorded message to Beck, he reiterated his belief that programs were created without freedom of choice, stating that "programs are just that, programmed." However, he then immediately contradicted himself by attempting to force Beck to choose his destiny.

Cyrus also has a playful side to his personality, though it is twisted by his insanity and manifests in games and complicated plots. His sense of superiority makes him unable to accept the fact that Tron chose another successor instead of him.

As a guard, Cyrus was capable of independent thought and quick decisions, and skillfully sabotaged a recognizer and landed himself and Tron safely in the Outlands with nothing but a Tron chute.

His combat skills are impressive; he was trained by Tron himself, and his fighting style is strikingly similar to Tron's, and far more effective. He was able to hold his own in a fight with both Tron and Beck, defeating the former easily and repeatedly taking the latter down; if he had not been determined to force Tron to acknowledge him before striking the final blow, he could have derezzed him easily.

He also has considerable engineering skill, possibly amounting to genius, as shown in his ability to retool the inside of his prison into an energy collector needing only the presence of another program as a catalyst to allow him to break free. He also created a false copy of Tron's disc, infected with a virus, and built several bombs with which to terrorize Argon City and Beck's friends. According to Able, Cyrus's abilities are limited to repurposing technology available to him.

When he first appeared to have a unique ability to ignore gravity, walking freely on vertical surfaces while Beck was forced to seek footholds. However, this ability seems to be limited only to his prison, since in No Bounds he was not able to do this in Argon City. 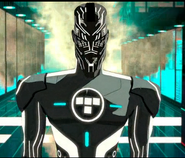 Cyrus as the renegade attempting to frame Beck