2
Daniel Bernard "D.B." Sweeney is an American actor. He is known for several film roles such as Doug Dorsey in the 1992 film The Cutting Edge.

For Disney, he voiced Aladar in the 2000 Disney animated film Dinosaur, and also the Scout in the movie who gets eaten by a Carnotaur but was only credited for Aladar and Sitka in the 2003 Disney animated film Brother Bear. He also voiced Slamm Hammer in the Phineas and Ferb episode "The Klimpaloon Ultimatum". He also played Colonel Driscolli in Miracle at St. Anna, Michael Holzcek in Roommates, Coach Rice in Going to the Mat, Graham Rympalski in Once and Again, Michael Whitman in Life as We Know It, Detective Kyle Seeger in Castle, and Joseph Tanner in Betrayal. 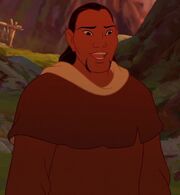 Sitka
(Brother Bear)
Add a photo to this gallery 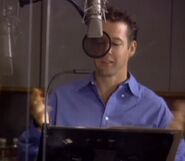 D.B. Sweeney behind the scenes of Dinosaur.

D.B. Sweeney behind the scenes of Brother Bear.

D.B. Sweeney attending the 28th annual Great Sports Legends benefit in September 2013.
Add a photo to this gallery
Retrieved from "https://disney.fandom.com/wiki/D.B._Sweeney?oldid=3949615"
Community content is available under CC-BY-SA unless otherwise noted.