D.J. is a Dalmatian puppy who appears in 101 Dalmatian Street.

D.J. is a Dalmatian who likes listening to music, as he is seen wearing headphones almost all the time. He also likes playing music using whatever objects he can find as instruments.

D.J. is a Dalmatian puppy with black ears that have a single big white circular spot on both of them that resemble headphones and two spots above his right eyebrow. He wears red headphones and a red collar with a black square dog tag with a white circle on it.

D.J. first appeared in "Boom Night" at the very end of the episode, relaxing on the roof and watching the fireworks with his siblings.

In "Poetry Scam", D.J. can be seen playing some bongos while Dylan recites his poem, and can also be seen dancing as Dolly does her freestyle.

In "Crushed Out", D.J. provides the music on a keyboard for Dylan's date with Portia the Poodle.

His first vocal appearance is in "The Woof Factor", where Dolly and Dylan come to him, looking for a third pup to help fill in for Triple-D in an advert, as the actual Triple-D are double booked. However, D.J. is unable to, as he is planning on busking in Covent Garden.

In "Dal-Martians", he used a theremin to make alien sounds as Dolly and Dawkins were fooling Dylan into believing aliens have come to Camden.

In "The Dog House", he helped Dolly and Triple-D build a human by programming the sound it makes, under what Triple-D describe as humans constantly talking.

In "Long Tongue Day", he is shown with the other pups hiding from the Camden Kraken, before watching Dolly & Dylan do battle with their model of it later in the episode. 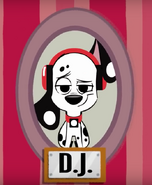 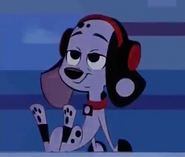 D.J. setting the mood for his brother's date with Portia