Rewards, money, being unattached to sides

DJ is a hidden antagonist in Star Wars: The Last Jedi. He is portrayed by Benicio del Toro.

On Cantonica, after Rose and Finn are put in prison in the city of Canto Bight, they meet DJ, who happens to be sleeping inside the same cell they are in. DJ overhears Finn and Rose talking about breaking into the First Order flagship, the Mega-class Star Dreadnought Supremacy, to disable their tracker, and he explains that he happens to be a hacker and a thief. DJ explains that he is familiar with the First Order coding and, for the right price, he can help Finn and Rose get into the Supremacy.

At first, Finn and Rose become suspicious of DJ and refuse his help, but then DJ simply unlocks the doors of all the cells of the prison using a lockpick and leaves. As Rose and Finn rush out of their cell after him, DJ meets BB-8, who had also been freed from his cell when DJ unlocked the doors. DJ becomes impressed when he sees that BB-8 defeated several cops by himself, and becomes even more surprised when he witnesses BB-8 knocking out more cops that appear to arrest them, by shooting coins that he had inside him at the cops.

After Rose and Finn escaped, they are chased by the Canto Bight guards and the two soon find themselves trapped on a hill, right before one of the guards space ships comes up behind them. They discover that the ship was actually stolen by DJ and BB-8, as they are piloting it and help them get away of the planet.

Later, when Finn and Rose attempt to get into the First Order Mega-Destroyer to disable its light speed tracker, DJ uses his hacking skills to get them in. They disguise themselves as First Order officers to get inside and disable the tracker, but are captured by Captain Phasma and BB-9E.

After being captured, DJ saves his own skin by buying his freedom with information on the Resistance he overheard during their travels. This information proves useful to the First Order and he is awarded his freedom, money and a ship to escape with. Phasma and the First Order Stormtroopers hand over the money to him, then give him a ship, and he flies away with the money. Nonetheless, he wishes Finn and Rose the best and reassures them that he is not loyal to the First Order before departing. 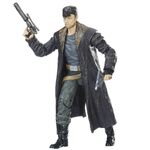