For Disney, he performed an end-credit version of "Friend Like Me", alongside Will Smith, for the 2019 live-action remake of Aladdin, and he performed "I Believe" for the2018 film  A Wrinkle in Time. He voiced Ears in the Fox/Blue Sky Studios film Spies in Disguise. Additionally, his song "All I Do Is Win" was featured in the DuckTales episode "The 87 Cent Solution!". He also appeared as himself in Spider-Man: Homecoming, NBA Finals: Watch the Game. 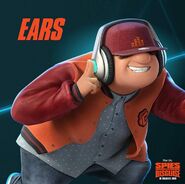 Ears
(Spies in Disguise)
Add a photo to this gallery 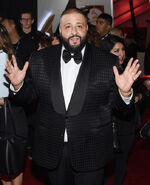 DJ Khalid poses in the Press Room at the 2017 American Music Awards.

DJ Khalid hosting the 2019 Nickelodeon Kids' Choice Awards.
Add a photo to this gallery
Retrieved from "https://disney.fandom.com/wiki/DJ_Khaled?oldid=4563601"
Community content is available under CC-BY-SA unless otherwise noted.