Da Vinci is an artistic Dalmatian. She likes to paint and speak her mind. Aside from paintings, she also does street art and graffiti. This hipster also has a very sensitive and honest side. She is a dreamer with a heart of gold.

Da Vinci has white fur, a black nose, and her spots are not only black but also a variety of colors to reflect on her being an artist. Her right eyebrow and eyelashes, which are located on her black eye patch are blue, and her front paws are always covered in paint. Her tongue is blue and one of her ears is folded while the other isn't. She also wears a hot pink bandanna around her neck, and sometimes over her muzzle.

Da Vinci and other pups made their onscreen debut as a cameo at the end of "Boom Night", watching the fireworks with the rest of their siblings.

In "Who The Dog Do You Think You Are?", she's seen blowing a raspberry at Arabella as she's pushing the remaining puppies out the door.

Da Vinci has her first speaking role in "Poetry Scam" where she paints over Diesel's cone while Dolly is wearing it to make it more appealing. Dolly refers to it as designer, but Da Vinci prefers to call it a statement cone.

Da Vinci briefly appears in "The Woof Factor", when Dylan and Dolly are looking for a third pup, so they can do an advert when Triple-D are double-booked. She cannot do so, however, since she is busy doing street art across town.

In "The Nose Job", Da Vinci is one of the initial suspects in the vandalizing of the park, as the horse statue was covered in paw prints. She later assists in breaking Diesel out of the slammer by painting a hole leading outside on the wall behind Diesel's cell so Pearl would be distracted as they escape, with Da Vinci using one of her spray cans as a door stop, too. The episode also shows Da Vinci has contraptions to help her with her artwork.

In "Doggy Da Vinci", she painted over white shirts which quickly became popular and Da Vinci was pressured into only doing that, much to her dismay. After Dylan and Dolly apologized, they offered the newly rebuilt wall as a blank canvas for her to paint on. 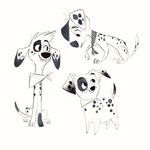 Retrieved from "https://disney.fandom.com/wiki/Da_Vinci?oldid=3987499"
Community content is available under CC-BY-SA unless otherwise noted.