Start a Wiki
Daisy's parents are the mother and father of Daisy Duck. They made their first appearance when Daisy introduces Donald to them in the theatrical cartoon Donald's Diary (1954). Her mother looks like James Whistler's portrait of "Arrangement in Grey and Black", is deaf and uses a hearing accessory. She is considerably taller than her husband. When she later visits Daisy and Donald at their house, she is more formally dressed, and has her brown hair tied in a bun and wears a hat with a flower on it. She was voiced by Vivi Janiss. Daisy's father is a photographer with a crazy-looking expression.

Besides Daisy, they have three kids who look exactly like Huey, Dewey, and Louie. According to Carl Barks' Flip Decision (Walt Disney's Comics and Stories #149), Daisy also has a sister living in Duckburg, which means that her parents must have had at least one other daughter.

As of yet, the only other appearance of Daisy's parents was a cameo in The Danger Caves, chapter 12 of the Donald Duck comic sub-series Tamers of Nonhuman Threats. They can be seen in a picture in Daisy's house. 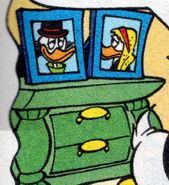 Daisy's parents in The Danger Caves.
Add a photo to this gallery

Retrieved from "https://disney.fandom.com/wiki/Daisy%27s_parents?oldid=3853013"
Community content is available under CC-BY-SA unless otherwise noted.