Danielle, Stella and Belle.
Daniel Edward "Dan" Aykroyd is a Canadian actor, comedian, musician, and filmmaker. He is perhaps best known for his roles as Ray Stantz in the Ghostbusters films (also reprising this role as a cameo in the 1995 live-action film, Casper) and Elwood Blues in the 1980 musical comedy film, The Blues Brothers. He also voiced Chip in DreamWorks' Antz and the titular character in the 2010 live-action/animated film, Yogi Bear.

For Disney, he made a special guest appearance as Rev. Mike Walker in the Home Improvement episode "Losing My Religion". He also played Jimmy Flaherty in Celtic Pride, Grocer in Grosse Pointe Blank, Art Weber in Indiana Jones and the Temple of Doom, and Captain Thurman in Pearl Harbor. 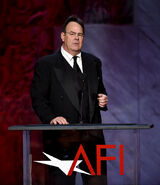 Retrieved from "https://disney.fandom.com/wiki/Dan_Aykroyd?oldid=4289484"
Community content is available under CC-BY-SA unless otherwise noted.