Deb Lacusta (1987-present)
Daniel Louis "Dan" Castellaneta is an American actor, voice actor, comedian, and screenwriter who is best known for voicing Homer Simpson, Krusty the Clown, Groundskeeper Willie, and many other characters in the popular Fox animated sitcom The Simpsons, which he has continued to do since Disney's acquisition of Fox. He also voiced Lazaar in Sonic the Hedgehog (Sonic SatAM), Jonathan Kraskell in the Nickelodeon series Rugrats, and the titular character in the animated TV series Earthworm Jim, based on the video game of the same name.

Castellaneta has also done voice-over work in numerous Disney productions, most notably providing the voice of Genie in the Aladdin franchise whenever Robin Williams was unavailable and Megavolt in Darkwing Duck. He also played Judge Markway in the ABC TV show, Castle and Patrick in 9-1-1: Lone Star. 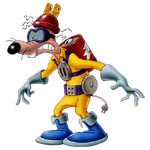 Homer Simpson
(The Simpsons: The Good, the Bart, and the Loki and The Simpsons in Plusaversary)

Dan Castellaneta at the premiere of The Simpsons Movie in July 2007.