Deb Lacusta (1987-present)
Daniel Louis "Dan" Castellaneta is an American actor, voice actor, comedian and screenwriter who is best known for voicing Homer Simpson and many other characters on the popular Fox animated sitcom The Simpsons. He also voiced the title character in the animated series Earthworm Jim, based on the video game of the same name.

He also has done voice-over work in several Disney productions. He provided the voice of Genie from the Aladdin franchise on occasions when Robin Williams was unavailable and also voiced Megavolt in Darkwing Duck, Go-Go in 101 Dalmatians: The Series, Stewart in Marsupilami, Dunkerque in Lloyd in Space, Mr. Geminini in Kim Possible, Dr. Zibaldo in TaleSpin, various voices in Buzz Lightyear of Star Command, several voices in Wander Over Yonder and Zabar in Dinosaurs. He was also the narrator for the 1993 Hollywood Pictures film Super Mario Bros.. He also played Judge Markway in the ABC TV show Castle. 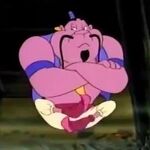 Spirit of the Lamp

Gil
Add a photo to this gallery

Retrieved from "https://disney.fandom.com/wiki/Dan_Castellaneta?oldid=2121859"
Community content is available under CC-BY-SA unless otherwise noted.