Disney Wiki
Register
Don't have an account?
Sign In
Advertisement
in: People, 1970s births, People from New Jersey,
and 10 more

Caitlin Thompson (m. 2015)
Daniel "Dan" Fogelman is an American film and TV producer, screenwriter, and director. He is best known for creating the NBC drama series This is Us. He also wrote screenplays for films, such as Fred Claus and Crazy Stupid Love. Additionally, he made his director debut with the 2015 biographical drama Danny Collins.

For Disney, he wrote the screenplays for animated films, such as Cars (Pixar), Bolt, and Tangled. 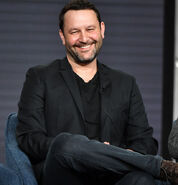 Dan Fogelman speaks at the This is Us panel at the 2020 Winter TCA Tour.