Daniel Kingsley “Dan” Povenmire is an American television director, writer, singer, producer, storyboard artist, creator, voice actor, and comedian. He is best known for co-creating the animated series Phineas and Ferb and Milo Murphy's Law. In voice acting, he is best known for providing the voice of Dr. Heinz Doofenshmirtz in Phineas and Ferb. He also voices Vinnie Dakota in Milo Murphy's Law. In addition, Povenmire has been one of the main songwriters since the beginning of both series, along with co-creator Jeff "Swampy" Marsh and fellow writer Martin Olson.

Working on the Phineas and Ferb/Milo Murphy's Law Universe

Dan and Marsh began to develop an idea for a show of their own in 1993 called Phineas and Ferb. Phineas and Ferb grew a plot that was based on Povenmire’s childhood. At a Wild Thyme restaurant, Dan drew the first drawing of titular character Phineas on the butcher paper laid out on the table. This began a domino effect of different characters, and they both began pitching the show around. Though every network they went to turned it down due to its complexity, the two’s stubbornness caused them to not give up on it.[1]

Not giving up on Phineas and Ferb, Dan continued to pitch the show around throughout his work on Family Guy. However, he was still being bested by each network’s worry of the awkward complexity they saw in the plot.[1]

Dan’s persistence finally paid off. Marsh had recently returned from England, now going by the nickname “Swampy,” and the two proceeded in pitching the show to Disney. At first, Disney was uninterested, though they asked to keep Povenmire’s packet of the show. Povenmire considered it over, as that usually, as he stated, “means they throw it in the trash later.”

But Disney, however, thought otherwise, and actually considered the show. They asked them to “see if they could do it for 11 minutes,” which they did, and then officially decided to pick up the show. Now 16 years after the initial creation of Phineas and Ferb, it was officially greenlit.

Povenmire wrote a total of 11 episodes for the first season, directing nearly everyone.[2] The show became a smash hit on the Disney Channel lineup, outranking shows like Hannah Montana and The Suite Life of Zack & Cody. Povenmire as well began voicing the show's main antagonist Dr. Heinz Doofenshmirtz.

Like on Family Guy, whenever Dan goes to work on Phineas and Ferb, he enjoys it, pretty much working “just to entertain themselves.” He draws 300 to 400 pages of work to keep the show going, presenting each storyboard to the Disney executives to get each episode produced.[3] The songs he, Swampy, and writer Martin Olson write every Friday are, as he says, “their jab at immortality.”[3]

After Phineas and Ferb aired their last episode, Dan and Swampy went to working on new series ideas to pitch to Disney Channel. The two came up with two spin-off shows to Phineas and Ferb. Those shoes were to be called "Doof 101" (a series focused on Doofenshmirtz trying to learn how to be good by teaching his daughters science class) and "The O.W.C.A. Files" (a series focused on Perry the Platypus teaching a new group of agents, including a reformed Doofenshmirtz). While Disney Channel didn't greenlight either series, they allowed Dan and Swampy to make both of the series planned pilots into Phineas and Ferb specials.

After Disney Channel rejecting their first two spin-off series', Dan began to think of a new show. While the two began creating the looks of the new characters, he fixated on a specific recurring character and decided to focus on that character. That character later became Milo Murphy.

Dan and Swampy pitched Milo Murphy's Law to Disney Channel and they greenlit the series with Dan voicing one of the two main Time Travelers of the show, Vinnie Dakota.

As of 2009, Dan is married with two children.[4] He has a young daughter named Isabella, for whom the character Isabella Garcia-Shapiro is named.[5] He has a cat named Sprocket, who lives a “double life” with his neighbor, in order to get two helpings of food. This appears to be the inspiration for character Perry the Platypus. In early to mid-2010, he added his young daughter Melissa to the show as a young Fireside Girl about the age of 5-7. She made her first appearance in “We Call it Maze” and was later seen in a clip in “Phineas’ Birthday Clip-O-Rama!”, as well as a crowd scene from "Happy Birthday, Isabella". He also had the inspiration of Melissa added into for Melissa Chase from Milo Murphy's Law. Melissa Povenmire will voice Gretel in Hamster & Gretel, credited as Meli Povenmire. 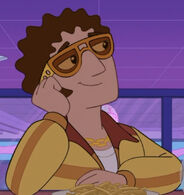 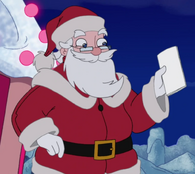 Ferb (singing voice, only in Summer All Over the World) 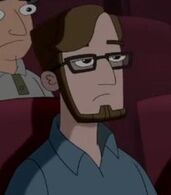 Dan Povenmire in front of many scenes from Phineas and Ferb in the video called We're Gonna To Do It Again.

Dan Povenmire with Swampy Marsh and Vince Martella at the 2019 D23 Expo.

Dan with Bobby Moynihan at a party amazed that they wore the same colored shirt.

Dan working on Phineas and Ferb the Movie: Candace Against the Universe from home due to the deadly 2019-20 COVID-19 pandemic.