Before joining Pixar, Scanlon was an animator for and served as a storyboard artist for direct to video features, such as The Little Mermaid II: Return to the Sea, 101 Dalmatians II: Patch's London Adventure, and The Hunchback of Notre Dame II.

Scanlon joined Pixar in September 2001 and worked as a storyboard artist on Cars and Toy Story 3. He also served as a member of the senior creative team on Brave and Inside Out.

In 2013, Scanlon made his directorial debut with the prequel, Monsters University.

In 2020, Scanlon directed the Pixar film, Onward and executive produced another Pixar film, Soul and Turning Red in 2022. 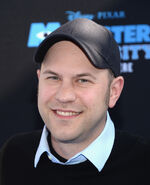 Dan Scanlon at the premiere of Monsters University in June 2013.

Dan Scanlon at the premiere of Onward in February 2020.