Willow, Eden and Aubrey
Daniel Jonathan "Dan" Stevens is an English actor and producer who is best known for playing Matthew Crawley in the period drama Downton Abbey. He also portrayed Charles Dickens in the 2017 biographical film, The Man Who Invented Christmas.

For Disney, he played Ian Katz in the 2013 DreamWorks/Touchstone Pictures film, The Fifth Estate, Drew Cola in the 2019 Fox film, Lucy in the Sky, and Hal in the 2020 Fox film, The Call of the Wild. He also portrayed the Beast in the 2017 live-action remake of Beauty and the Beast. Additionally, he narrated the Once Upon a Time special "Wicked is Coming". 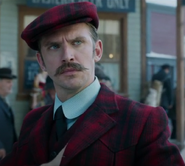 Dan Stevens at premiere of the Beauty and the Beast remake in March 2017.

Dan Stevens speaks at the Legions panel at the 2018 Winter TCA Tour.
Add a photo to this gallery
Retrieved from "https://disney.fandom.com/wiki/Dan_Stevens?oldid=4000061"
Community content is available under CC-BY-SA unless otherwise noted.