Alex Hirsch
Dana Terrace is an American animator, writer, storyboard artist, director, producer, and voice actress who is best known for her work on Gravity Falls and the creator of the animated series, The Owl House.

Terrace graduated from the School of Visual Arts in New York during the spring of 2013 and subsequently moved to Los Angeles, California after getting hired as a storyboard revisionist for Gravity Falls. After finishing work on the show, Terrace became a director on the first season of the rebooted DuckTales series and as a storyboard artist for the Tangled: The Series episode, "Challenge of the Brave".[1] She is currently the executive producer on The Owl House.

Aside from executive-producing The Owl House, Terrace also voices the character Tiny Nose.[2] She also provided the vocal effects for King's "squeak of rage" in The Owl House episode, "Escape of the Palisman", although she was uncredited.[3]

In addition to this, she has also provided in-house animation for both Gravity Falls and DuckTales. For Gravity Falls, she animated the closing sequence in "Not What He Seems" and Bill Cipher's death in "Weirdmageddon Part 4: Somewhere in the Woods". For DuckTales, she was an additional animator in the episode "Woo-oo!".

Character based off of Terrace (on the left)

Dana and Wendie Malick with an Eda cosplayer 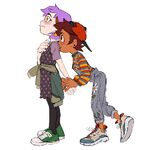