Disney Wiki
Register
Don't have an account?
Sign In
Advertisement
in: Songs, Articles with unsourced statements, Fantasia,
and 9 more

Dance of the Hours

Dance of the Hours

“Now we're going to do one of the most famous and popular ballets ever written: the "Dance of the Hours" from Ponchielli's opera "La Gioconda". It's a pageant of the hours of the day. We see first a group of dancers in costumes to suggest the delicate light of dawn. Then a second group enters dressed to represent the brilliant light of noon day. As these withdraw, a third group enters in costumes that suggest the delicate tones of early evening. Then a last group, all in black, the somber hours of the night. Suddenly, the orchestra bursts into a brilliant finale in which the hours of darkness are overcome by the hours of light. All this takes place in the great hall, with its garden beyond, of the palace of Duke Alvise, a Venetian nobleman.”
―Deems Taylor[src]

Dance of the Hours is the sixth and penultimate musical segment in Disney's Fantasia.

A pair of palace doors open and as we enter, we see Madame Upanova the ostrich, who begins to perform her warm-up exercises, waking her fellow students. As they perform, their movements made somewhat ungainly by their long legs, Madame Upanova is thrown into the air, descending gracefully. She flutters her eyelashes and her bow at the viewer. She then finds a large conch of fruit and distributes it among her dancers, but chooses to keep the grapes for herself. The ostriches squabble between themselves over the grapes, resulting in the grapes being dropped into a pool, from which bubbles rise. Madame Upanova and her dancers promptly flee.

Next, we see Hyacinth Hippo who comes out of the pool and eats the grapes while shaking water off her ballet slippers and tail, and is dressed in a tutu by her servants, making herself up with a powder puff, and then begins to dance slowly and gracefully - ironically much more gracefully than the skinny ostriches - playing 'pat-a-cake' with her hippo servants and pirouetting, spinning her fat up her body and sinking down again. However, this soon tires her out and she yawns. Her servants pull her to a couch, which she falls asleep on, her weight bending the couch visibly as evening falls.

Then we see Elephanchine and her elephant troupe who tiptoe in so as not to wake the sleeping Hyacinth, surrounding her briefly, and then moving to the pool where they begin to blow bubbles with their trunks. One to her astonishment blows a bubble with a goldfish in it. Hyacinth yawns widely, inhaling all the bubbles and when one bursts on her bottom, tugging her tutu down a little. However, she does not awaken. With their bubbles, the elephant troupe create their own tutus and begin to blow bubbles and kick them off their backs, though one gets a bubble stuck on her foot. They create a pillar of bubbles that supports the slumbering Hyacinth high in the air. A strong wind blows, blowing the elephants and their bubbles away, night falls, and Hyacinth drifts gently to the ground.

The clock strikes six, and alligators begin to approach the sleeping Hyacinth, surrounding her. One whispers to his companions and points at the sleeping Hyacinth. Then we see Ben Ali Gator who sees the alligators surrounding Hyacinth. He tosses his cape aside and leaps forward, frightening them away. He then approaches Hyacinth and is instantly astounded by her beauty. She awakens and is surprised by Ben Ali Gator, then enters a Pas de Deux with him, first fleeing, then running back, and leaping into a lift, which the much slimmer Ben Ali has trouble performing. He pirouettes her, eventually riding around on her extended leg and finally bowing to her.

In the climax, Hyacinth teases Ben Ali, running from his advances and nearly running into several alligators as she does so. He pursues her, falling into the pool as he does so. She then runs through a line of dancing hippos. Ben Ali and his alligators pursue them also, frightening them away. The ostriches and elephants hide behind pillars as the alligators search the palace, pulling out hippos, elephants, and ostriches, with the ballet becoming rapidly more chaotic. All of the characters are shown dancing together, including Ben Ali with Hyacinth, performing lifts rapidly, finally standing over her, with her gazing adoringly at him.

On a final drumbeat, the doors slam shut, collapsing in on each other, and the scene fades to black.

Ben Ali Gator - A noble and courteous alligator, who falls in love with Hyacinth Hippo. He is the leader of the Nighttime Dancers, and is distinguished from his rival alligators by his cap with a feather, and that he throws aside his red cloak.

Hyacinth Hippo - A lovely and graceful hippo, who falls in love with Ben Ali Gator. She is the leader of the Daytime Dancers and is distinguished from her servant hippos by her yellow tutu and ballet slippers, while her servants wear pink.

Madame Upanova - A vain and somewhat ungainly ostrich. She is the leader of the Morning Dancers and is distinguished from her student ostriches by her pink bow and ballet slippers, while her students wear blue.

Elephanchine - A soft-footed elephant. She is the leader of the Evening Dancers, but is indistinguishable from them, as all the Evening Dancers are elephants and wear pink ballet slippers, and none of them has any significant role in their section. 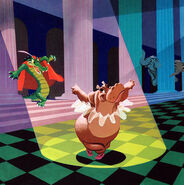