1990-present
Dane Jeffrey Cook is an American stand-up comedian and film and television actor known for films, such as Mystery Men, Employee of the Month, and Good Luck Chuck.

For Disney, he voiced Dusty Crophopper in the 2013 Disney animated film, Planes and its 2014 sequel, Planes: Fire & Rescue. He also played Mitch Burns in the Touchstone Pictures film, Dan in Real Life.

Dusty Crophopper
(Planes franchise)
Add a photo to this gallery

Dane Cook behind the scenes of Planes.

Dane Cook at premiere of Planes in August 2013.

Dane Cook attending the 4th biennial Stand Up to Cancer event in September 2014. 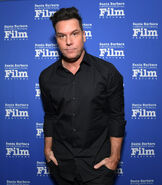 Retrieved from "https://disney.fandom.com/wiki/Dane_Cook?oldid=3976826"
Community content is available under CC-BY-SA unless otherwise noted.