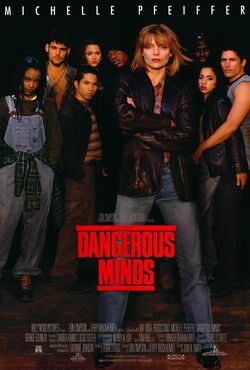 Dangerous Minds is a 1995 American drama hood film based on the autobiography My Posse Don't Do Homework by former U.S. Marine LouAnne Johnson, who took up a teaching position at Carlmont High School in Belmont, California, in 1989, where most of her students were African-American and Hispanic teenagers from East Palo Alto, a then-unincorporated town at the opposite end of the school district. Starring Michelle Pfeiffer as LouAnne Johnson, the film was released to mixed reception, but became a surprise box office success in the summer of 1995, leading to the creation of a short-lived television series.

LouAnne Johnson (Michelle Pfeiffer), a retired U.S. Marine, applies for a teaching job at Parkmont High School in California, and is surprised and pleased to be offered the position with immediate effect. Turning up the next day to begin teaching, however, she finds herself confronted with a classroom of tough, sullen teenagers, all from lower-class and underprivileged backgrounds, involved in gang warfare and drug pushing, flatly refusing to engage with anything. They immediately coin the nickname "White Bread" for LouAnne, due to her Caucasian appearance and apparent lack of authority, to which LouAnne responds by returning the next day in a leather jacket and teaching them karate. The students show some interest in such activities, but immediately revert to their former behavior when LouAnne tries to teach the curriculum.

Desperate to reach the students, LouAnne devises classroom exercises that teach similar principles to the prescribed work, but using themes and language that appeal to the streetwise students. She also tries to motivate them by giving them all an A grade from the beginning of the year, and arguing that the only thing required of them is that they maintain it. In order to introduce them to poetry, LouAnne uses the lyrics of Bob Dylan's 'Mr. Tambourine Man' to teach symbolism and metaphor; once this is achieved, she progresses on to Dylan Thomas's 'Do not go gentle into that good night'. LouAnne rewards the students liberally, using candy bars, reward incentives, and a trip to a theme park. Her methods attract the anger of the school authorities, George Grandey (Courtney B. Vance) and Carla Nichols (Robin Bartlett), who try to force her to remain within the curriculum.

Particular individual students attract LouAnne's attention for their personal problems. Callie Roberts (Bruklin Harris) is an unusually bright girl who excels at English, but is removed from the school halfway through the semester when she becomes pregnant. LouAnne visits her outside of school hours to try to persuade her to continue with further education. Raúl Sanchero (Renoly Santiago) is a well-meaning boy who is frequently involved in gang warfare and street crime. LouAnne tries to encourage him to focus by paying a special visit to his family to congratulate him on his work, and going to dinner with him as a way of instilling confidence and self-respect. Emilio Ramírez (Wade Domínguez) is her most troublesome personal project, as he believes strongly in a sense of personal honor that prevents him from asking for help. When LouAnne discovers that his life is in danger because of a personal grudge held by a recently-released thug, she tries to protect him, but due to the cold attitude of the principal, he is abandoned at the crucial moment and is subsequently killed.

At the end of the year, she announces to the class that she will not be continuing to teach at the school, which prompts an unbridled display of emotion from the students who refuse to let her leave. Overwhelmed, she reconsiders the decision.

Dangerous Minds was one of the last films of producer Don Simpson. Andy García filmed scenes as Michelle Pfeiffer's love interest, but these were cut before the film's release. The actual school at which LouAnne Johnson taught, Carlmont High School in Belmont, California, was used as a filming location, along with Burlingame High School, San Mateo High School, and Washington Middle School.

Dangerous Minds currently holds a score of 29% on Rotten Tomatoes, and a score of 47 on Metacritic, indicating mixed-to-negative reviews.

Janet Maslin in the New York Times wrote: "There aren't many things that would look better on paper than on Michelle Pfeiffer, but the role of LouAnne Johnson is one of them... False and condescending films in this genre are nothing new, but Dangerous Minds steamrollers its way over some real talent. Ms. Pfeiffer is a vastly better actress than this one-dimensional character allows her to be... Never mind the complaints that could be made about LouAnne's teaching methods: she rewards students with bribes, flirts patronizingly and inflicts cruel and unusual punishment while analyzing the subtext of 'Mr. Tambourine Man'... The kids turn out to be angels, straight from central casting... Performances are as lifelike as the material allows, but Ronald Bass's screenplay doesn't trade heavily in surprises."

Kenneth Turan in the Los Angeles Times wrote: "While films are admired for making fantasy real, some manage a reverse, unwanted kind of alchemy, turning involving reality into meaningless piffle. It is that kind of regrettable transformation that Dangerous Minds achieves... none of it, with the exception of Pfeiffer's performance, seems even vaguely real. This is especially true of the film's excessively melodramatic climactic events, a bogus tragedy that does not occur in the book and has contrived written all over it... Given how few the opportunities are for women to carry a motion picture, and with the chance to be a positive role model thrown into the bargain, it's not surprising to find Pfeiffer starring in Dangerous Minds, and she is as believable as the film allows her to be. But if this trivialization of involving subject matter is the best a star of her considerable abilities can latch onto, today's actresses have it worse than we've imagined."

Roger Ebert in the Chicago Sun-Times wrote: "We have seen this basic story before, in Stand and Deliver, Lean On Me, Teachers, Dead Poets Society, and so on. This version is less than compelling... Pfeiffer, who is a good actress, does with this material what she can... The real Miss Johnson used not Dylan but the lyrics of rap songs to get the class interested in poetry... What has happened in the book-to-movie transition of LouAnne Johnson's book is revealing. The movie pretends to show poor black kids being bribed into literacy by Dylan and candy bars, but actually it is the crossover white audience that is being bribed with mind-candy in the form of safe words by the two Dylans. What are the chances this movie could have been made with Michelle Pfeiffer hooking the kids on the lyrics of Ice Cube or Snoop Doggy Dogg?"

Terrence Rafferty in The New Yorker wrote: "Thanks to Pfeiffer’s inventive acting, John N. Smith’s movie does a fairly entertaining job of capturing the unscrupulous, guerrilla-like cunning of a good teacher in a bad school. But the cut-to-the-enlightenment dramaturgy of Ronald Bass’s screenplay feels desperate and false. And in the final scenes the movie gets as sticky as To Sir With Love. It canonizes the heroine needlessly: Pfeiffer looks plenty good without a halo."

Peter Travers in Rolling Stone wrote: "The young and mostly unknown cast is outstanding. And Pfeiffer gives a funny, scrappy performance that makes you feel a committed teacher's fire to make a difference. The film also benefits from the sly touch of Elaine May, who collaborated with Ronald Bass (Rain Man) on this screen adaptation of Johnson's 1992 memoir, My Posse Don't Do Homework... Maybe producers Don Simpson and Jerry Bruckheimer (Bad Boys, Crimson Tide) don't know how to let a strong female character carry the ball. Dangerous Minds often unspools like a hokey update of Sidney Poitier's To Sir With Love. Still, in a summer when most women are forced to play dumb and strip to thrill or kill, Pfeiffer does herself and her endangered species proud."

Kevin McManus in the Washington Post wrote: "Unhappily, Dangerous Minds, which tells the story of such a [charismatic] teacher, merits only a C. And if it weren't for Michelle Pfeiffer, we'd surely be looking at a more dismal grade... writer Ronald Bass sprinkles the script with saccharine lines that sound plain dumb coming from high schoolers. "But you can't leave us," one kid whines as Pfeiffer gets set to quit. "You're our Tambourine Man!"... Pfeiffer and the students (played by talented unknowns) make sections of the movie quite watchable. When their wisecracks fly back and forth in class, it sounds right. When sequences depict school corridors and city streets, it looks right. If only the filmmakers had used some subtlety in telling the story, they could have done right by the real LouAnne Johnson."

Edward Guthmann in the San Francisco Chronicle wrote: "It's contrived, it's hokey, but in Dangerous Minds, a Michelle Pfeiffer vehicle, it works surprisingly well... She's playing with a bag of clichés, but she's so plucky and likable, you overlook the hokum."

Time Out wrote: "Actually it's quite a respectable piece of work, with an impressive tough-love performance from Pfeiffer, but Ronald Bass's hackneyed screenplay is all carrot and no stick."

The commercial success of the film prompted the creation of a spin-off television series, Dangerous Minds, featuring Annie Potts in the role of LouAnne Johnson. The series premiered on ABC on September 30, 1996 and ended on March 15, 1997, after one season of seventeen episodes.

In 2009, the comedy website CollegeHumor released a trailer for the non-existent film Dangerous Wands, a parody of the film. The plot featured an adult Hermione Granger, a character from the film series based upon J. K. Rowling's acclaimed Harry Potter books, going to teach at 'the worst wizard school around.'

Retrieved from "https://disney.fandom.com/wiki/Dangerous_Minds?oldid=3702778"
Community content is available under CC-BY-SA unless otherwise noted.