1
Danica Mae McKellar is an American actress, mathematics writer, voice actress, and education advocate. She is known for her role as Gwendolyn "Winnie" Cooper in ABC's The Wonder Years.

For Disney, she played Sandrine in the Even Stevens episode "Sibling Rivalry", and voiced Josette and Collette, as well as Becky, in Phineas and Ferb, and Veronica in Milo Murphy's Law. 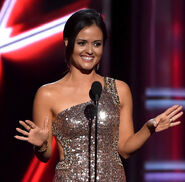 Danica McKellar speaks onstage at the 2015 Billboard Music Awads.
Add a photo to this gallery

Retrieved from "https://disney.fandom.com/wiki/Danica_McKellar?oldid=3928094"
Community content is available under CC-BY-SA unless otherwise noted.