Disney Wiki
Register
Don't have an account?
Sign In
Advertisement
in: People, People from California, Males,
and 18 more

Claire and Asher
Daniel Robert "Dan" Gerson was an American screenwriter and voice actor, who worked on several Disney and Pixar films, such as Monsters, Inc., Chicken Little, Monsters University, Cars, Meet the Robinsons, and Big Hero 6, which was reported to be his last film as a screenwriter.

His voice can also be heard in several films, such as Needleman and Smitty in Monsters, Inc., and Sergeant Gerson in Big Hero 6.

Gerson passed away from brain cancer at the age of 49 on February 6, 2016. He is survived by Beau Stacom, his wife of 20 years,[1] his children: Claire and Asher, his parents: Mary-Joan and Charles, and his sister: Jessica and her children: Daisy and Henry.[2] 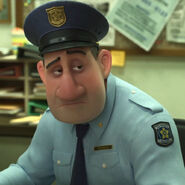 Dan Gerson with Robert Baird at the premiere of Monsters University in June 2013.