Daniel Jacob Stern is an American actor, director, screenwriter, voice artist, and comedian, best known for his role as Marv Merchants in Home Alone and Home Alone 2: Lost in New York, Phil Bernquist in the City Slickers franchise, and the voice of Kevin Arnold in The Wonder Years. He also starred in Otis.

For Disney, he played Hal Petersham in D.O.A..

Stern with Goofy on the cover to Disney Adventures (July 1994) 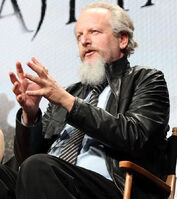 Stern at the Manhattan panel at the 2014 Summer TCA Tour
Add a photo to this gallery
Retrieved from "https://disney.fandom.com/wiki/Daniel_Stern?oldid=3781212"
Community content is available under CC-BY-SA unless otherwise noted.