Honey (by Lorenzo)
Mom (by Luca)

The ocean in Portorosso, Italy

The ocean, Luca's safety, squeaking like a dolphin, playing foosball

“The world is a very dangerous place, Luca! And if I have to send you to the bottom of the ocean to keep you safe, so be it!”
―Daniela to Luca

Daniela Paguro is a supporting character in the 2021 Disney•Pixar animated feature film, Luca. She is a sea monster and Luca's mother who is very assertive on never going to the surface.

Daniela Paguro is Luca’s loving mother who’s determined to keep her son safe. She regularly warns Luca of the dangers beyond the sea and the land monsters who live there. Daniela is no pushover: If she thinks Luca is breaking her number-one rule – don’t go near the surface – she’ll go to great lengths to stop him.

In human form, Daniela has fair skin, magenta eyes, and wavy, long, medium brown hair. She wears a blue dress with a white waist apron and is barefoot all the time.

In sea monster form, Daniela looks about the same as Luca in her sea monster form, having blue and greenish scales and thin blue fins on her head to replicate her hair. Her eyes are still magenta, but they're more lighter with a fair, yellow sclera and oval-shaped pupils. Daniela also wears a dress, presumably made from seaweed, and has spiky, caudal fins on her arms, cheeks, back, back ankles, and long tail.

Daniela is first seen calling Luca out for lunch at their home to which upon taking Luca home, she discusses with her family in a plan to beat Bianca Branzino in this year's crab show where she discusses about Branzino's crabs and dolphin impression. During a conversation with his grandmother and when Luca asks her about being at the surface, his mother prohibits him from mentioning the human world to which she warns him to avoid going above the surface just before taking Luca back to work.

While working at herding the goatfish, Daniela tells her son to look at her explaining that she still loves him, despite telling her son to avoid the human world. As Luca gets back to work, Daniela asks her husband to know if they were a little worried about him to which he denies. However, instead of doing the task his mother taught him, Luca curiously finds objects from the human world in the underwater world and later places a statue that looks like him called "Smuca" so to avoid getting noticed.

That night after his first encounter with Alberto, Luca approaches his mother who is disappointed to know where he went to which his grandmother interrupts that she sent Luca to look for sea cucumbers to which Daniela explains to her mother that protecting Luca is more important than snacks.

During a montage of Luca and Alberto privately building a Vespa, Daniela notices "Smuca" at the farming area while harvesting seaweed underwater to which she notices that Luca has left, followed by her husband picking up an alarm clock and a playing card from the human world to which they feel confused upon noticing what happened to Luca. Later that night upon returning to the ocean, Luca approaches his mother as well as the objects her husband Lorenzo found to which while discussing with him, he tells him to promise to avoid sneaking off to the surface again. During the conversation, Uncle Ugo hears the conversation and as he plans to keep Luca safe, he explains to his mother about what he is trying to do to which she explains to her son that he will stay with his uncle for the rest of the season, much to his worry as Daniela discusses with her son about the dangers of the human world to which instead of staying with his uncle, Luca risks himself in going to the surface with Alberto again.

Realizing that Luca went to the human world, Lorenzo and his wife Daniela arrive looking for their son to which the two find themselves in human form on dry land. Reacting to their human forms upon reaching dry land, Daniela then tells her husband to look for Luca and bring him back to his family's home in the underwater world. While exploring the harbor, Daniela tells her husband to stay focused while looking for their son to which upon seeing the townsfolk while not noticing Luca and Alberto passing by. They later pass by a group of children playing soccer across the town to which upon seeing, Daniela decides to "play" with the children much to her not being to used to legs as Lorenzo decides to look for his missing son as Luca hears his mother imitating dolphin noises as the two are having a hard time looking for their son across the town.

During a montage of Luca and Alberto preparing for the Portorosso Cup, Daniela and her husband Lorenzo drop water balloons of some children eating watermelon while looking for their missing son and later when the two pass by a movie poster depicting artwork of a sea monster with the characteristics of an anglerfish, reminding the two of Uncle Ugo at the ocean. While Daniela worriedly loses faith in looking for her missing son, her husband Lorenzo plays with a bottle of shampoo for fun.

During dinner time with Massimo, Daniela is served with pasta just as Grandma arrives and talks with her daughter about the good things Luca did. Later the next day, Daniela and the rest of her family approach Luca and to which she explains to Luca that if he promises to write to them every single day and be as safe as possible, he can go to school to which Luca accepts the promise his mother gave him. Later, Luca bids an emotional farewell to his parents just before boarding the train to Genova.

"Gonna tell us where you've been?"

First time out the water. 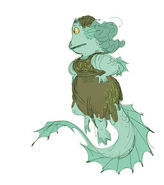 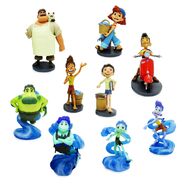