Danny is Edward and Wendy's son, Jane's brother, and one of the minor protagonists in Disney's 2002 film Return to Never Land, the sequel to the 1953 film Peter Pan.

Danny is a very adventurous and fun-loving 4-year-old boy, with a deep faith in Wendy's stories about Peter Pan. However, his feelings can be easily hurt (as is evident when Jane ridicules his faith in the Peter stories Wendy tells him). He is also an innocent boy (as is made evident of his dislike and fear of war and war devices, such as bomber planes and their bombs).

Danny is first seen in Wendy's arms when she and family are looking at Neverland. He is also seen with her when Edward leaves for the war. In his next appearance, he and Wendy head to the bomb shelter and he expresses his fear of the bomber planes and bombs. She makes him feel better, resulting in him believing it's Captain Hook. Jane and Nana II arrive and Jane gives him socks as his birthday gift and he's initially not happy with them, but Wendy imagines them as Peter Pan and Captain Hook. She then tells him a story about Peter and when Jane says that she has no time for such activity, he informs her that's she's not fun anymore, even going so far as to mention that she herself had wanted to become the first Lost Girl. He is later taken to the nursery by Jane, but he later argues with her about Peter's existence and sadly runs off. He is next seen with Wendy during the song "I'll Try", talking about Peter again.

He is also seen in flashbacks when Jane is by herself in Neverland and is thinking of home.

He is next seen near the end and is surprised by Jane's new attitude towards Peter. She then tells him the story of Captain Hook kidnapping her, at which he is fascinated, and she also tells him about Tinker Bell. He is then seen at the window, seeing Peter for the first time. It is then that Edward returns home from the war and they go to greet him.

Wendy looking out the window at Neverland with Edward, Jane, and Danny 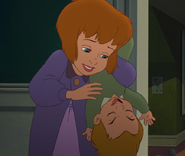 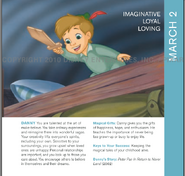