Lola, Mali, and Oliver
Daniel Robert "Danny" Elfman is an American film composer, singer, songwriter, recorded producer, and actor who was the former front man of the new wave band Oingo Boingo between 1976 and 1995 and is well known for creating the theme song of the popular Fox animated sitcom, The Simpsons. He is known particularly for his collaborations with filmmaker Tim Burton, composing the score to The Nightmare Before Christmas, in which he stars as the singing voice of Jack Skellington.

In 1986, his band Oingo Boingo performed at Videopolis as part of Grad Nite. It would not be the first time the band performed on the stage, as the stage had previously been used for Steve Wozniak's US Festivals, on which Oingo Boingo performed in both September 1982 and May 1983. The stage was moved to Disneyland in 1985 as part of the Videopolis night club, which has since been rethemed to the Fantasyland Theatre.

In 2002, Elfman's score for The Nightmare Before Christmas was adapted and rearranged by John Debney for the Haunted Mansion Holiday attraction overlay at Disneyland. The seasonal overlay first premiered the previous year, but utilized an original score composed by Gordon Goodwin, who did not utilize Elfman's score from the film. In 2013, Elfman would score Mystic Manor for Hong Kong Disneyland and provide vocals for the singing helmets and tikis.

Elfman appears in a Nightmare Before Christmas-themed episode of the Disney+ original documentary series, Prop Culture, sharing from his personal collection a Jack Skellington puppet used in the film, as well as providing backstory to his role in the creation and characterization of Jack. The episode uses much of Elfman's score from the film, as well as several songs from his former band, Oingo Boingo.

In addition to his work with Burton, Elfman has also worked frequently with director Sam Raimi, and his film scores are often orchestrated by Oingo Boingo bandmate and composer Steve Bartek.

Danny Elfman at the premiere of Dumbo in March 2019.

Danny Elfman singing a song from The Nightmare Before Christmas at the Hollywood Bowl. 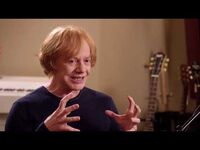