2 daughters
Danny Nucci is an Italian-American actor and voice actor. Born in Klagenfurt, Austria, to a French Moroccan mother and an Italian father, Nucci was raised in Italy until the age of seven, when his family relocated to the United States. After temporarily living in Queens, New York, the family settled in San Fernando Valley, California. 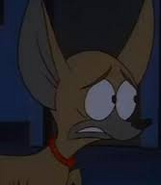 Alberto
(The Brave Little Toaster to the Rescue)
Add a photo to this gallery
Retrieved from "https://disney.fandom.com/wiki/Danny_Nucci?oldid=4239525"
Community content is available under CC-BY-SA unless otherwise noted.