Norris' Disney roles include Louie in the 2008 Disney animated feature film, Bolt, Dick Daring, Lowe Stowe, and Santa Claus in The Replacements. He also provided additional voices in The Avengers: Earth's Mightiest Heroes, Stitch!, and Phineas and Ferb, and as well as the announcer in The Adventures in Nutrition with Captain Carlos. Additionally, he narrated the first four trailers for Rolie Polie Olie, and did the trailer voice-over for the Disney Learning Adventures series. He later became the announcer of Mike's Super Short Show.

In 2015, Norris portrayed Colonel Fink in series finale of Dog with a Blog. He also played Jefferson Landry in the Disney XD series Gamer's Guide to Pretty Much Everything and a game show host in the ABC TV show, The Real O'Neals.

Flyinator
(The Buzz on Maggie) 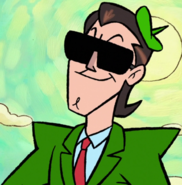 Narrator
(The Adventures in Nutrition with Captain Carlos)