Disney Wiki
Register
Don't have an account?
Sign In
Advertisement
in: Article of the week, The Disney Afternoon shows, Darkwing Duck,
and 6 more
English

This article is about the television series. For the character, see Darkwing Duck.

Darkwing Duck is an American animated television series produced by The Walt Disney Company and created by Tad Stones that ran from 1991 - 1995, and from 1996 - 1997 on both the syndicated programming block The Disney Afternoon, and on Saturday mornings on ABC. It featured the eponymous superhero anthropomorphic duck, with the alter ego of Drake Mallard (voiced by Jim Cummings).

Though it was believed to be spin-off of DuckTales, Stones has stated that these two shows were to take place in separate universes, while sharing the characters Launchpad McQuack and Gizmoduck on a regular basis, as well as Carl Barks' villain characters appearing in one of the episodes.

Darkwing Duck is about the adventures of the titular superhero, aided by his sidekick and pilot straight from DuckTales, Launchpad McQuack. In his secret identity of Drake Mallard, he lives in an unassuming suburban house with his adopted tomboyish daughter Gosalyn, next door to the bafflingly dim-witted Muddlefoot family. Darkwing struggles to balance his egotistical craving for fame and attention against his desire to be a good father to Gosalyn and help do good in St. Canard. Most episodes put these two aspects of Darkwing's character in direct conflict, though Darkwing's better nature usually prevails.

Darkwing Duck was initially developed as a last minute replacement for a proposed reboot of The Rocky and Bullwinkle Show when the management team realized that Disney did not actually own the rights to the characters, but only the home video rights. The series was originally a spin-off of DuckTales, entering production roughly one year after the series ended. It was mainly inspired by the episodes "Double-O-Duck" and "The Masked Mallard". The original concept had Launchpad McQuack as the star. Instead, Launchpad appeared as Darkwing's sidekick in the finished product. Gizmoduck, a character from the final season of DuckTales, also appeared in a handful of crossover-themed episodes. The name "The Masked Mallard" became an epithet often used to refer to Darkwing himself.

Though loosely connected to the Mickey Mouse mythos, Darkwing Duck was unique in that it featured no characters from classic Disney animation (save for the Beagle Boys), instead introducing an original cast. It was also the first Disney Afternoon cartoon to emphasize action rather than adventure, with Darkwing routinely engaging in slapstick battles with both supervillains and street criminals. While conflict with villains was routine in earlier Disney Afternoon, actual fight scenes were relatively rare.

Darkwing Duck was also the first Disney Afternoon property that was produced completely as a genre parody. Prior shows would contain elements of parody in certain episodes, but would otherwise be straight-faced adventure concepts in the tradition of Carl Barks's work in the Disney comics. By contrast, every episode of Darkwing Duck is laden with references to superhero, pulp adventure, or super-spy fiction.

Darkwing Duck himself is a satirical character. His costume, gas gun, and flashy introductions are all reminiscent of pulp heroes such as the Sandman, Batman, Crimson Avenger, the Green Hornet, James Bond, the Scarlet Pimpernel, and most especially, The Shadow. The fictional city of St. Canard is a direct parody of Gotham City, the fictional city in which Batman resides and operates.

Over two seasons, there were a total of 91 episodes.

In the second season of the show, the creators were developing a Halloween-themed episode. In the episode "Hot Spells", Gosalyn makes a deal with the devil that costs Darkwing his soul. The episode was never replayed on Toon Disney after its initial airing.

There are seven different versions of the Darkwing Duck introduction. The first two were aired on the Disney Channel when Darkwing Duck first premiered and featured alternate animation and a different version of the familiar theme song. The third version was used on the "Darkly Dawns the Duck" VHS. The fourth version was used in syndication, and is actually the one they currently use today. The fifth is the version used on The Disney Afternoon, and is the same as the fourth version, only cut for time. The sixth and seventh introductions were used on the ABC Saturday Morning airings, and contained mostly scenes from those episodes, starting with Darkwing tiptoeing up the Audubon Bay Bridge.

The two-part episode "Darkly Dawns the Duck" originally aired as an hour-length TV special on September 7, 1991 as part of a larger TV special, "The Darkwing Duck Premiere and Back to School With the Mickey Mouse Club". The film served as the show's pilot. Seasons 1 and 2 were aired simultaneously in the Autumn of 1991. Season 1 on syndication as part of The Disney Afternoon block of shows. Seasons 2 and 3 aired on Saturday mornings on ABC. All episodes remained in syndicated reruns on The Disney Afternoon until 1995 and then returned to the line up from 1996 to 1997.

The series was last seen in the U.S. on Toon Disney, but due to the rebranding of Jetix and other Disney shows to the channel, it later vanished completely from the network. Along with a number of other shows, it was removed from schedule in November 2004. Toon Disney aired the Christmas episode featuring Bushroot on December 25, 2004. The show was last seen on Toon Disney in the United States on January 19, 2007 as part of the Toon Disney Wild Card Stack. Certain episodes from the show's original run rarely re-aired while the show was on Toon Disney. These episodes appear to have been removed for content reasons. The most prominent of the rarely-seen episodes is "Hot Spells", which features a Satan-like character called Beelzebub.

This show is currently airing on:

Four VHS tapes, each containing two episodes of Darkwing Duck, were released under the title Darkwing Duck: His Favorite Adventures in the United States in 1993: Darkly Dawns the Duck, Justice Ducks Unite!, Comic Book Capers, and The Birth of Negaduck! However, most countries around the world only received releases of Darkly Dawns the Duck and Justice Ducks Unite! Each video came with two glow-in-the-dark trading cards. Featured on the cards were: Darkwing, Launchpad, Gosalyn, Honker, Negaduck, Bushroot, Megavolt, and Taurus Bulba.

Walt Disney Studios Home Entertainment released a 3-disc DVD box set entitled Darkwing Duck: Volume 1 on August 29, 2006. It includes the first 27 episodes aired in syndication, including the 2-part pilot "Darkly Dawns the Duck", which was presented in edited form as opposed to the uncut version's release on VHS and Laserdisc. The second volume, containing the next 27 syndicated episodes, was released on August 7, 2007. Unlike DuckTales and Chip 'n Dale Rescue Rangers, the episodes on the DVDs are presented in the order they aired. The sets do not contain any special features.

One volume was released to Region 2 DVD, which contains all 65 of the syndicated episodes.

In the United States, the entire series (except for the episode "Hot Spells") was made available for purchase on digital through iTunes and Google Play on September 24, 2019 in the SD format. The entire series, including "Hot Spells", was released in Germany through Amazon Video in 2017.

There was a Darkwing Duck video game released by Capcom on the Nintendo Entertainment System and the Game Boy. Another game was also made for the TurboGrafx-16.

Disney Comics published a four-issue Darkwing Duck comic book mini-series in late 1991, right around the time of the show's syndicated premiere. This mini-series was an adaptation of a draft of the script for "Darkly Dawns the Duck". Like the TaleSpin comic before it, it was meant to spin off a regular comic series, but the Disney Comics implosion happening at the time prevented that plan. However, Darkwing Duck stories were regularly printed in Disney Adventures magazine between the November 1991 and January 1996 issues. Additionally, Darkwing Duck stories were also regularly featured in Marvel Comics' short-lived Disney Afternoon comic book.

On March 13, 2010, Boom! Studios announced that they would be releasing a four-issue Darkwing Duck miniseries, titled "The Duck Knight Returns", starting in June of that year. The series was written by Aaron Sparrow (uncredited), Ian Brill, and drawn by James Silvani, and was set some time after the end of the show. Boom! later announced that due to positive fan reaction, the comic series would be extended indefinitely as an ongoing. After Disney's purchase of Marvel Comics however, the series ended at issue 18.

In October 2014, artist James Silvani announced that the first sixteen issues of the comic would be revised and collected in an Omnibus-styled book titled Darkwing Duck: The Definitively Dangerous Edition, to be published by Joe Books. It was also announced that the omnibus would lead in to a new monthly series written by Sparrow and drawn by Silvani. The new series began in April 2016, less than a month after the show's 25th anniversary, but was cancelled after only eight issues.

The Disney Adventures stories were reprinted in Darkwing Duck: Just Us Justice Ducks – Disney Afternoon Adventures Vol. 1 published by Fantagraphics which was slated to be released on June 22, 2021 but was delayed to July 27, 2021.[3]

Darkwing Duck was named the 93rd best animated series by IGN, calling it "one of the many reasons why after-school cartoons rule."[4]

On November 13, 2020, following the success of the 2017 DuckTales reboot and announcing its third season being being the final in December, a Darkwing Duck reboot was announced. The series will be produced by Disney Television Animation and Point Grey Pictures, with executive producers for the series including Seth Rogen, Evan Goldberg, James Weaver, and Alex McAtee, known for their R-rated works from Sausage Party and their upcoming TMNT animated film by Gravity Falls Jeff Rowe.[5] Tad Stones revealed that he is involved in the reboot series as a creative consultant.[6] The show will be released on Disney+.

During a Disney+ Day announcement for the live-action/animated Chip 'n Dale Rescue Rangers movie, a script for Darkwing Duck could be spotted in the background that read, "Production Draft 2022."[7] 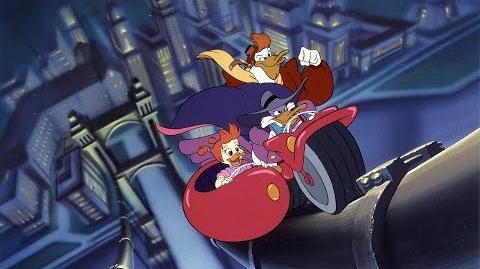 The Disney Wiki has a collection of images and media related to Darkwing Duck.

References in other Disney media