Darkwing Duck is a video game for the TurboGrafx-16 console based on the animated series of the same name. It was designed by Interactive Designs and Radiance Software. It was published by Turbo Technologies Inc. in 1992.

Steelbeak has recruited some of St. Canard's dangerous criminals to help to build an ultimate crime weapon. As a result, S.H.U.S.H. requires the help of Darkwing Duck to stop them. There are few clues, except a picture of the criminals looking at stolen artwork. Darkwing must bring Steelbeak to justice by scouring the city to find puzzle pieces that reveal the villain's location.

Players battle enemies while collecting puzzle pieces scattered throughout each of the first three levels. Levels are timed and Darkwing is crushed by a falling safe for prolonged idling.

The player's primary attack is jumping on enemies heads. The player can also use a gas gun, which can only be used when the player has gas pellets as ammunition. Three colors of gas pellets correspond to confusing, sleeping and knock out gases, which describe the effects inflicted on enemies. Cherry bombs can be used to defeat all enemies on the screen and scattered power-ups can be collected for various effects such as increasing remaining lives or granting temporary invulnerability.

The game was reviewed by James Rolfe in 2015 as part of his Angry Video Game Nerd series on YouTube. 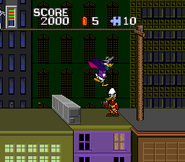 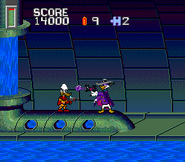 Darkwing using his gas gun.
Add a photo to this gallery

Retrieved from "https://disney.fandom.com/wiki/Darkwing_Duck_(TurboGrafx-16_video_game)?oldid=4495682"
Community content is available under CC-BY-SA unless otherwise noted.