To bring Nemo home as a pet (failed)

Dead fish, not getting what she wants

Tries to reach Nemo, but grabs the sink, accidentally breaks it, and gets sprayed in the face

Darla Sherman is the secondary antagonist of the 2003 Disney•Pixar animated film, Finding Nemo.

Darla is the niece of Philip Sherman, a dentist. She is not evil or malicious but rather rambunctious and having the overexcitement of having pet fish, which ironically has frequently resulted in her killing them by accident.

Gill and the other fishes in Sherman's fish tank describe Darla as a fish killer and that Nemo is supposed to be her new pet fish. The last fish she received, Chuckles, was killed by her because she wouldn't stop shaking the bag Chuckles was in. In the scene where Darla is about to take Nemo from her uncle, Nemo plays dead, but Darla thinks he is just sleeping and starts shaking the bag. Gill then fires himself out of the tank and lands in her hair, causing her to drop Nemo bursting his bag. After Gill catapults Nemo into the air, Darla tries to grab him, but she misses and he lands in the sink and is swallowed into the drain leading to the ocean. Darla then grabs the sink, but she accidentally breaks it, causing it to squirt water in her face.

Darla was seen in the magazine that Molly Davis read after organizing her donations to Sunnyside Daycare.

Although Philip Sherman does not appear in this film, Darla's photo that her uncle has in his consulting office makes a cameo appearance in the Marine Life Institute when Dory meets Hank in the quarantine office. This may imply she has relatives working at the institute.

Darla appears in some Finding Nemo related attractions such as the Finding Nemo - The Musical show at Disney's Animal Kingdom playing the same part she did in the film, and in the Finding Nemo Submarine Voyage attraction in the lagoon diving with her uncle. In Tokyo DisneySea's Nemo & Friends SeaRider, Darla appears in a sequence taking place at the Marine Life Institute's touch tank where she grabs the SeaRider submarine, but drops it when Hank grabs it from her grasp. 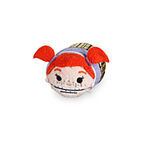 Retrieved from "https://disney.fandom.com/wiki/Darla_Sherman?oldid=3901891"
Community content is available under CC-BY-SA unless otherwise noted.