Her family and dogs, knitting, lullabies

In pre-production, Jim Dear was known as Jim Brown, and Darling was named Elizabeth. These were dropped to highlight Lady's point of view. In a very early version, published as a short story in a 1944 Disney children's anthology, Lady refers to them as "Mister" and "Missis." To maintain a dog's perspective, Jim Dear and Darling's faces are rarely shown. The background artists made models of the interiors of Jim Dear and Darling's house and shot photos and film at a low perspective as a reference to maintain a dog's view.

The film's opening sequence, in which Darling unwraps a hat box on Christmas morning and finds Lady inside, is based upon an actual incident in Walt Disney's life when he presented his wife, Lillian, with a Cocker Spaniel  puppy as a gift in a hatbox.

Jim Dear and Darling are very loving people, to both each other and their to pets. At first, Jim Dear attempts to be firm with their new puppy, Lady, but he later gives in and allows her to sleep with them after Darling requests it. They appear to be dog-lovers, having adopted two: Tramp and Angel, besides having Lady and Lady and Tramp's puppies.

In the first film, Jim Dear and Darling are introduced as a young married couple. At Christmas, he presents her with the gift of a Cocker Spaniel puppy, whom she names Lady. That night, they make a bed in the laundry room for her, but she becomes lonely. Darling wishes for her to sleep with them, but Jim Dear remains firm. He finally gives in, though he states that it is just for that night.

A few months later, when Lady is six months old, it is revealed that she now sleeps with Jim Dear and Darling regularly. Realizing that she has grown up, they present her with a collar and license. Later on, it is shown that they have been unintentionally been treating her somewhat coldly. However, she soon learns that they're expecting a baby. After Jim Jr. is born, Jim Dear and Darling introduce Lady to him. Soon after, they leave for a short trip, leaving Lady and Jim Jr. in the care of Aunt Sarah.

They return near the end of the film. Aunt Sarah reveals that a stray dog had been in Jim Jr.'s room and that she had the dogcatcher take him to the pound. After hearing Lady barking, they release her from the cellar, where Aunt Sarah had locked her up. Jim Dear realizes that she is attempting to tell them something, and so he, Darling, and Aunt Sarah follow her to Jim Jr.'s room. There, they're able to find a dead rat. They realize that Tramp had been trying to protect Jim Jr. from it.

Darling, along with Jim Dear and Lady, follows the dogcatcher and retrieves Tramp. She and Jim Dear adopt Tramp, and the following Christmas reveals that he and Lady have a litter of four puppies.

Jim Dear and Darling reappear as the owners of Lady, Tramp, and their puppies. After one of them, Scamp, makes a mess in the house, they are forced to chain him to a doghouse outside. Later on, they take the dogs out on a family picnic, during which Scamp steals a chicken to take to the Junkyard Dogs. At the end of the film, Jim Dear and Darling adopt his girlfriend, Angel, whom he had met on the streets.

Darling appears in the 2019 film remake, played by Kiersey Clemons. 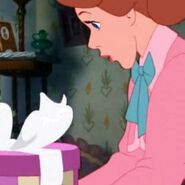 Darling in Lady and the Tramp II: Scamp's Adventure 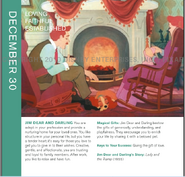 Her and Jim Dear's Disneystrology page